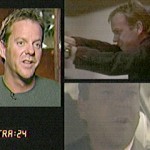 It’s the heart pounding, edge-of-your-seat drama that has throngs of fans tuned to FOX every Monday night. And “Extra’s” Jerry Penacoli caught up with the stars of “24,” Kiefer Sutherland and his love interest, Kim Raver, to get the exclusive scoop on the mind-blowing season.

Why do you think so many people are drawn to this show?
Kiefer Sutherland: I think for the same reasons people like a rollercoaster. I think the time element adds another danger and threat to it.

Kim Raver: They aren’t afraid to really go for it. And we can relate to that, it goes into our fears, what would happen if there was a nuclear meltdown. But it’s not all fear and loathing on the set, especially when celebrities like John Mayer drop by.

Kiefer Sutherland: He’s the hugest fan. We were all so flattered he wanted to come by and he ended up doing a little jam session for us.

So is he bucking for a guest-starring role?
Kiefer Sutherland: No, I think he wanted to fire guns through CTU, so our prop guys set him up and he had a run at it. And Mayer isn’t the only fan. At a recent awards show, Jamie Foxx shared his “24” love. He turned around and said, “My favorite show, I love it,” and I went, “Ah!”

So what lengths do you go to keep the plotlines secret?
Kiefer Sutherland: We rewrite and re-shoot everything. I have gone back to McDonald’s and Burger King at some point and tried to fish it back out of the garbage and thought that was really careless.

I can just see the photos now — Kiefer in the trash can at McDonald’s.
Kiefer Sutherland: Yeah, apparently he needs a raise. 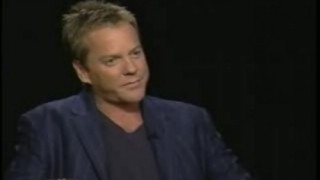 Kiefer Sutherland talks about the 24 Season 4 premiere and the new changes made this season.