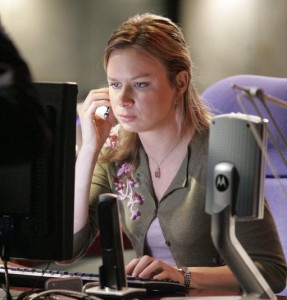 Mary-Lynn Rajskub is no computer whiz. In fact, she barely knows how to access her emails. Strange then, that her biggest television role so far is playing super computer-geek Chloe O’Brian, a tech analyst on the hit drama series, 24.

O’Brian manages to dodge most of the the action, as she’s expected to stay back and (wo)man the unit.

“That’s something I like about Chloe, because she’s very much up in her head. She never pictures herself as being really at the crux of it. Or really herself being in danger.”

It’s a sunny Thursday afternoon in Los Angeles and Rajskub is on the phone from her backyard, about to have lunch. It’s a welcome day off from filming on the show’s seventh series; series six begins here tonight on TV3.

“I kind of have the best life ever because I am shooting at the moment, but I get a lot of days off while they shoot different parts of the show.” She joined 24 in 2003 at the start of the show’s third season. Her character was a hit with viewers and critics and was one of the few cast members to return in the show’s fourth season. After being a regular guest star for two seasons, Rajskub became a main cast member in the show’s fifth season and is now lead female, with top billing second only to Kiefer Sutherland.

A yes, there still are plans for a 24 movie, but production has been pushed back to 2009. The plan has always been to do the film after the finish of season eight, says Rajskub. “They haven’t said this officially yet, so it might be an even longer wait.”

Although her name might not be that familiar, Rajskub (it’s pronounced rice-cub), has one of those “what have I seen her in?” faces. She started in stand-up comedy and went on to appear in Punch Drunk Love and Little Miss Sunshine. She’s such a newcomer to drama, her audition for 24 was her first for a serious dramatic role.

“The creator of 24 had actually seen me in Punch Drunk Love and he liked the qualities of the character I played in that movie. She was kinda bitchy and overbearing.” She admits it’s a weird life being on an Emmy-award winning show; even weirder considering Rajskub herself wasn’t a fan of the show before going for the audition. Fans often approach her to talk about the series. “I went to Japan and some fans had like this colour map with all the faces of all the characters. And they’ve just obsessively mapped out how everything’s linked and what’s happening.

“I’m focused on what we’re shooting right now so when people ask me about other seasons, I don’t know what’s going on.” There has been much speculation about the relationship between Chloe and Jack and whether there is the possibility of a romance brewing. But Rajskub is opposed to it.

“People are like, when is she going to get together with him? I’m like, it would be the worst idea ever and then they would hate each other.” But is Chloe in love with Jack? She’s got a ready answer.

“I’m thinking about that this year because there are some things that are sort of questioning why my character is so loyal to Jack. She’s gotta be in love with him on some level. I think she doesn’t want to let him down, she wants to be … like him.” There is also a big revelation towards the end of season six, something which she thinks will help viewers see what attracts Chloe to Jack. So back to her techno-phobia how does she handle it?

“Am I such a good actress or what?”she deadpans, before admitting one of the show’s writers and producers was a computer scientist. “He supplies the words so they’re relatively correct. There’s a certain head space that you get into that’s just the logic of the show. You start to think all these things make sense to you and then you go home and you just think I don’t know what any of that is.” How does she remember Chloe’s lines then, which are often peppered with geek jargon?

“When you’re pretending, it really goes a long way. I think you just make associations in your head with other things that make sense to you. I’m getting this thing and I’m putting it there, it makes perfect sense.”

As for where she sees her character heading next, Rajskub is philosophical.

“It’s been the best job of my career because I don’t think anybody knew where the character was gonna go and she went from being annoying know-it-all to have all these other layers to her.”