Audiences following the seventh season of ’24′ know that Sengalanese henchman Colonel Iké Dubaku (Hakeem Kae-Kazim) put up a good fight in trying to bring President Allison Taylor (Cherry Jones) and the United States to its knees with some particularly nasty domestic terrorist attacks. But unfortunately for Dubaku (and most ‘24‘ villains), his fatal mistake was grossly underestimating the power of one Mr. Jack Bauer.

After ten hours of playing cat and mouse with Jack in Washington D.C., Dubaku was finally done in by his lied to American girlfriend after she causes a car accident to stop him for good. Poor Dubaku; love hurts, literally.

With that twist, ’24′s’ season narrative kicks into phase two tonight when Dubaku’s very angry boss General Benjamin Juma arrives in town to take care of his Sengala interests and that pesky Jack Bauer too. Veteran heavyweight actor Tony Todd (Candyman, The Crow) originated the Juma character in last November’s movie ‘24: Redemption,’ and he joins the series again to add some fresh mayhem to the mix. In a recent interview, Todd talks to Fancast about what ’24′ fans can expect from his baddass dictator.

How did the producers of ’24′ approach you about returning to the franchise, but this time playing General Benjamin Juma?
I was lucky enough to be able to work in Season 3 as a homicide detective (Detective Norris). I worked with Howard Gordon before on [‘The X-Files’]. They were having difficulty with this particular character and he gave me a call. I was working on ‘Chuck’, the series on NBC, and had just finished a film. I liked what I read and everything worked out. And then two weeks later I am in South Africa.

General Juma was first introduced in ’24: Redemption’ so you got to travel to South Africa with the crew. How was that experience?
Well, as an actor it was my third time in Africa. I had never been in South Africa before, but I’ve been to Kenya and Morocco. It was amazing. Every time you travel there as an African American it’s always a heartwarming experience to travel close to your country of origin.

How is working with Kiefer Sutherland?
He is a terrific guy. He brings his A-game. It is different when you work on a show where it already has an established base. Everybody is confident and putting in their work time. So it creates a relaxed, yet pumped up, environment because there is no pressure in that sense; work is just work. The cast and crew are all family and have been there for years and they’re just committed to the cause and doing a good job hopefully.

So how does Juma get onto American soil from Sangala – a long swim?
Yeah. I can’t put myself on the Internet and beam myself there. You can’t just do it like that. (snaps his fingers) Particularly when you’re doing it with little paddles; there are a lot of currents. (Laughs)

But Juma does sneak in by water?
Yeah. It was great. We actually had to go in the water and do scuba diving stunts.

Did you have to train for those scenes?
Yeah. It’s one of the good things about my business, that when I do a western I have to get on the horse, and when I’m swimming across to America, I’ve got to scuba dive.

Your resume is filled with lots of villainous roles, but every character, good or bad, has their own unique perspective. How did you go about grounding Juma in some sort of plausible perspective?
In my mind he’s not a bad guy at all. I grounded him in the fact that he was promised certain things by the American government. After my character is denied, it happens then that I have to take matters into my own hands and I have the capacity and the army to do it. There is a small group of soldiers with me and we go over to America and we get what we were promised.

Did you go back and watch any of the many other ’24′ villains on the show to prepare?
No, I can’t. We are in television, so you know which way it is going to go and you enjoy the ride. When we bring my soldiers over we know it’s a suicide mission. We’re just going to make as much impact as we can while we are going on this journey, because you’ve got to enjoy it.

That doesn’t sound too good for Juma’s long-term future. How long does he last as Jack Bauer’s foe?
Well, I know that it’s going to be a fascinating season and there are three sections within the season where there’s going to be two-hour [events]. I’m involved in two of those, so you will see a lot more of General Juma. 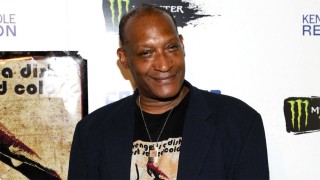