Extra’s AJ Calloway has interviewed Kiefer Sutherland in New York City about the upcoming 24 movie. While it’s mostly stuff he’s been saying before, he teases a bit more at the end.

Let’s just talk 24 for a minute. What’s the status of the film and what can the fans expect?
Brian Grazer and Ron Howard who run Imagine [Entertainment] produced the television show in coordination with FOX and there’s a real strong push to start in January and hopefully have the film out by — it is slated right now for the summer of 2012. As in everything, nothing is etched in stone, but everything is moving towards that. And so I’m very excited. We’ve worked very hard to try and get the script in, you know, that was going to encompass all of the sentiments of 24 the series but really take us in another direction. And I think that’s been a real task. And so it’s taken us a little while, but I am very optimistic and cautiously optimistic. We’re going to start hopefully in January.

What would you like to see Jack do in the movie?
I wanna see Jack do a lot of things that were representative of the show, but I think one of the things I certainly felt as an actor playing him, I wanted him to be able to take his life back. And I think that’s going to be a large aspect of the film.

Extra’s Mario Lopez has interviewed Kiefer Sutherland on the new CTU set, check out the footage below: Source: Extra 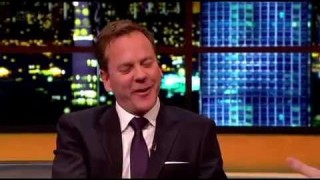 May 15, 2011 at 2:50 am
Given that it looks as though Kim Raver may leave Grey’s Anatomy, what do fans think of a reunion between Jack and Audrey. I was not happy with how things eneded between the two of them in season six and I feel it would good to have some closure between the two of them. Yeah totally agree with whoever said Chloe should be a character, as for Tony, after season 7; I am not a fan of his, I did not like the way the writers took his character and I have not seen season 8 yet, so perhaps I should reserve my better judgement. Summer 2012, the June/July and we Aussies would most likely get it maybe at the end of 2012. It’s a long wait, but it’ll be worth it!

May 17, 2011 at 2:14 am
The business! Kiefer really sounds committed and super-enthusiastic about the ’24’ movie, which is really refreshing, considering some stars are pretty blase about their signature roles, but Kief’ is the man, and if the movie turns out to be a real kicker, it will largely be because the Kief’ has refused to let it go, and insisted on quality before cash-in, and we’ll all get a much better movie as a result.

If they’re still planning on beginning production in January, an August 24th release date would be kinda appropriate, if not, move it to March or April 2013. Jack is back, oh goody… (rubbing of hands)!!!

May 19, 2011 at 11:50 am
And great news TV Fox executive confirms the 24 movie
link: http://24heureschronohommage.over-blog.com/ext/http://www.cinemablend.com/new/Fox-TV-Executive-Confirms-The-24-Movie-Is-Still-Alive-But-With-No-Finished-Script-24723.html

June 18, 2011 at 7:16 pm
No, no, no, for Jack and Kim Ravner. I hated her in 24. She was too whiny and could not understand the type of man he was and the type of work he had to do to get the job done. They should have never killed off Renee Walker. She was way better for Jack. Plus she was prettier. And I also hated that hideous huge beast-monster woman that was in Season 8 – Katie Sackoff. Oh she was just a horror!