After a two-week-long American Idol-induced hiatus, 24 ticks off this evening with the first of five original episodes. When we last clocked in with Fox’s serial thriller, bomb sniffer Jack (Kiefer Sutherland) was closing in on terrorist mastermind Syed Ali (Francesco Quinn), President Palmer’s estranged wife Sherry (Penny Johnson Jerald) was revealed to be the mole inside the White House, and whitebread bride-to-be Marie Warner (Laura Harris) shot and killed her fiancé, Reza (Phillip Rhys). While we would never welcome time off from 24, the break did give us an opportunity to catch our breath — and ponder some of the show’s unsolved mysteries. Luckily, story editor Virgil Williams took an hour out of his busy day to help us make sense of all the action. — Michael Ausiello

TV Guide Online: Are you going to sell us convincingly on Marie being a cold-blooded terrorist?
Virgil Williams: Yeah, that will all fill in and make a lot more sense than it does right now. Don’t forget, we have whitebread terrorists within our own boarders, so it’s not an unreal thing. Actually, it is all kind of unreal. It’s fiction. It’s TV.

TVGO: Given the show’s penchant for out-of-left field twists, it almost would have been more shocking if prime suspect Reza had turned out to be the terrorist. You agree?
Williams: Yeah, a sort of double-negative… I totally get that. And those kinds of reveals and those kinds of twists are things that absolutely come up when we’re breaking story.

TVGO: I understand that many people actually guessed that Marie was the baddie.
Williams: Everyone that I’ve spoken to suspected every single character — with the exception Jack and President Palmer and Kim [Bauer] — as being some sort of villain. That’s one of the fun things about 24 — you’re constantly guessing.

TVGO: Did you feel pressured post 9-11 to make the terrorists non-Arab?
Williams: That’s a tremendous, tremendous question. It’s a fine line that we have to walk, because we’re trying to create entertainment, but yet at the same time we have to be very cognizant [that we aren’t] creating or enforcing negative stereotypes. All of that’s very sticky stuff. I think the pressure was more on making sure that the playing field was equal with regard to all of the characters — Arab and non-Arab. In every race, there’s an equal mix of good and bad.

TVGO: Was it a conscious decision on your part not to name Syed Ali’s home country?
Williams: Absolutely. Because when you start to get into that, especially right now, that becomes unfair.

TVGO: Any fear that one plot twist too many will leave the audience no longer able to suspend their disbelief?
Williams: Having too many plot twists would be like having too many genes; I don’t know if that’s possible. Our duty is to make those twists entertaining, and to make them at least feel organic to our story. If you take a step back and look at 24, it’s all completely preposterous. It’s all fiction. It’s all crazy, crazy fiction. But the bottom line is, we want to do something that our fans enjoy, that our fans can chew on, that our fans can get into. That’s the real point of this whole thing.

TVGO: Which twist elicited the most feedback, either positive or negative?
Williams: Teri Bauer’s amnesia [from last season]. It just played horribly… it played cheesy.

TVGO: Did you alter any future plots as a result of that reaction?
Williams: [Avoiding the cheesy] has always been a constant [concern] of ours. When we’re creating story, that’s something that’s always there. The ideas that present themselves during the creation process range from farce to unaffordable; they run the gamut.

TVGO: Any characters that are sacred and, therefore, unkillable?
Williams: Not a one.

TVGO: Not even Jack?
Williams: Yes, even though we’re talking about Kiefer Sutherland, I’m still going with not a one. Anything can happen on our show.

TVGO: Any reaction to critics who hate the character of Kim Bauer?
Williams: We groan about her, too. The thing I say to that is: Think back to your 19th year in life, and I bet that you can come up with as many groans about the decisions you made as an 18- or 19-year-old, if not more. She’s a teenager, and teenagers act with their heart. But as the season moves along, she will start to evolve and come into her own more and start to act instead of react.

TVGO: Is it difficult to get all of the characters where they need to be geographically without fudging the time element?
Williams: A great part of our transportation happens — if you pay close, close attention — [very early] in the morning when it’s easy to get around L.A. But there is a fudge, that’s a good name for it. But we do research. In fact, we chose to send Jack to Visalia [earlier this season] because he could get there via jet in 15 minutes.

TVGO: One theory out there is that there isn’t actually a bomb, which would explain how someone like Sherry Palmer could be involved. Care to comment?
Williams: That’s a great theory, and my answer to that is, stay tuned.

TVGO: Will this season’s finale contain anything as shocking as Teri’s murder at the hands of Nina during last May’s cliffhanger?
Williams: If we do our job right, yes.

TVGO: You’ve dealt with a presidential assassination attempt and, now, a nuclear bomb threat. Will it be tough to come up with a Season Three crisis?
Williams: Sure. Yes.

TVGO: Do you know what it is going to be?
Williams: We haven’t sat down in an official capacity, but absolutely we have dedicated time to it.

TVGO: What can you tease about tonight’s episode?
Williams: Let’s just put it this way: Jack Bauer is willing to do whatever it takes to stop this bomb.

TVGO: Well, we already knew that. Anything else?
Williams: Jack Bauer is willing to do whatever it takes to keep our country safe.

TVGO: Alrighty. Any famous guest stars coming up?
Williams: We have stuff in the works, but nothing I can talk about because nothing’s set and I don’t want to start the rumor mill.

TVGO: Any pivotal new characters on the horizon?
Williams: Yes. As we unpeel the layers of the onion, there will be people under the layers lying in wait to make themselves present and contribute to the trials and tribulations. Stay tuned… 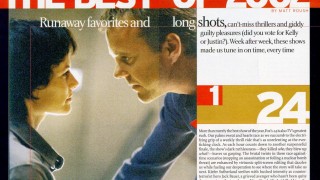 The Observer’s Duncan Campbell wonders how much ‘reality’ TV we can bear: People in Los Angeles are buying plastic sheets and duct tape so that they can seal off a ‘safe room’ in their homes for when the bomb goes off. The intelligence services are warning of an imminent terrorist attack. New hot-lines for information… View Article