Fact and Fiction Mix on 24

LOS ANGELES — An uncanny similarity to current events is seeping evermore into Fox’s high-profile drama 24 as the show nears its season finale.

The show, starring Kiefer Sutherland, has been developing subplots that remarkably mirror world events — even though most of the script was written well before the world was plunged into war with Iraq and came out victorious.

For instance, on the show U.S. military action is pending in the Middle East because of American suspicions that those countries are on the verge of launching an attack. And the fictional White House continually juggles the conflict of ensuring homeland security and launching preemptive strikes on possible threats.

Dennis Haysbert, the actor who plays President Palmer on 24, marveled at the show’s eerie timeliness.

“It’s like we have inside information,” he said. “It’s like somebody is traveling in time and coming back with these stories. It’s really kind of funny.”

Writers for the real-time action thriller crafted story lines long before war became reality, though. Since Sept. 11, 2001, Americans have been all too aware of the possibility of terror plots against their country.

“You know they started writing this whole war story line pretty far back and I don’t think any of us, at the time when these scripts started coming out, thought we’re going to war,” said Carlos Bernard, the actor who plays Tony Almeida. “It really wasn’t in the air.”

Racial tensions and attacks have also been portrayed on the program. There have been scenes of verbal and physical abuse against Middle Eastern immigrant characters on the show. In one episode, a character was called “towel head” and then beaten to death by his racist attackers.

And some references on the show have been played out in the world’s true fight against terrorism.

“My character brought up this mosque in London called the Finsbury Park Mosque,” said Bernard. “Well, we shot that I think in October or September (of 2002), and come January, they raided that very mosque and busted some terrorists there.”

Indeed, British authorities discovered a stun gun, multiple passports, a CS gas canister and credit cards among other suspicious items in the mosque in late January 2003, and arrested several people.

With only three episodes left before the show’s finale, who knows what other explosive real-life details could be played out in the drama. Fox News tried to get a season-ending scoop out of Haysbert, but he wasn’t talking.

“You know I just can’t do it. It would be such a disservice to you to tell you what’s coming down the pipe,” he said. “The only guy who’s really safe is the guy on the poster and that’s Kiefer.” 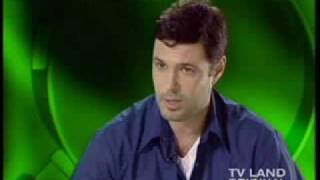 TV Land aired a documentary today titled “When Real Life and Screen Life Collide” which had Carlos Bernard (24‘s Tony Almeida) in it. He talked about his real life basketball injury which required him to be on crutches for three months and how the writers incorporated that into the storyline by having Tony get into… View Article