Penny Johnson Jerald, who plays Sherry Palmer, President Palmer’s scheming ex-wife on 24, is asked at the semi-annual gathering of the Television Critics Association what she thinks about the Fox network’s penchant for giving key story twists away in the show’s weekly promos. The unexpected return of her character, for example, after six months’ absence. Assuming she is allowed to talk about it, that is.
“I talk about everything,” Jerald says, “and I say absolutely nothing, because that’s what we do on 24. Yep, she’s back. I can definitely tell you that, because you’ve seen it for yourself. And I think she’s going to turn the world upside down as you know it.”

Kiefer Sutherland, who looks more relaxed and tanned in real life than the harried counterterrorism agent he plays on TV, weighs in on the same issue.
“It is frustrating,” he says. “The network has a responsibility to entice viewers to come back to the show and tell other viewers to watch the show, and they do a fantastic job at that. [The writers] do a fantastic job writing intricate plot points that make it very difficult to put those trailers together. Obviously, on our side of the fence, we would rather have no promos. But that’s not realistic.”

Critics have written that 24 sometimes seems as if it was written the way a five-year-old tells a story. Jack dies! Jack is fine again! Writer-producers Joel Surnow and Robert Cochran, who have a reputation for winging it at times, are asked if they have a clue how this season’s potboiler about Mexican drug lords, a killer virus and turncoat triple agents is supposed to end.
“No,” Cochran replies.

Jerald is asked if there’s ever been a time she picked up a script for her character and thought, “I can’t believe this is happening.”
“Every time I pick up a script,” Jerald replies. “I look at it and think, ‘Oh, my God, she’s doing what?’ In the first season, I remember looking at the script and it said I’m going to pimp my husband, and I thought, ‘You know, she really is different from what I thought she’d be.’ I’m always surprised when I pick up a script. These fellows here, I don’t know what kind of women they’re hanging out with.”

Surnow and Cochran are asked how real their fictional president is. After all, he never seems surrounded by a cadre of secret agents or handlers, whereas President Bartlet on The West Wing can’t go to the bathroom without two memos and a mob of advisers.
“First of all,” Surnow replies, “none of our characters ever goes to the bathroom, so we don’t have that problem.”

“My guess is Bill Clinton did a few things when there weren’t any secret agents around to watch,” Cochran adds. “The secret agents are there. You just can’t see them. That’s probably the way to look at it.”

It seems like exile in northern Africa has really agreed with Nina. So will we ever learn what happened to her?
“She took a few knitting classes, learned to speak languages,” Surnow says facetiously. “You know, our show really doesn’t dwell on what happened before. It’s real time. It’s what’s happening in that moment. We will give little indications of things from her past from time to time, but they usually won’t matter. Yes, it’s interesting to a certain degree, but we really don’t have time in the show to keep the tension ratcheted up and then stop and tell people what happened in the past. Because that really doesn’t feel that tense.”

The actors are asked if the constant surprises make it hard to stay in the moment.
“I don’t sleep any more,” Carlos Bernard, who plays Tony Almeida, replies. “Or go to the bathroom. I feel that helps me a great deal.”

Sutherland reveals the inside skinny on how to walk and talk on a cellphone at the same time.
“One of the things I’ve found is that if he’s moving, it works. It’s easier to have a conversation on the run using a cellphone than it is to have a conversation with someone running beside you. It’s become a device where my character can internalize panic, can express any number of different things while having a conversation with someone else. It’s a fantastic device for my character. The only downside is that I’m half-deaf in one ear, and so naturally I put the phone in my good ear, and so I can barely hear the other actors I’m working with.”

Bernard is asked what ran through his mind when he read in the script that his actor was going to be shot in the neck and undergo major surgery, without knowing that his character would be up and walking around after no more than an hour or so.
“They took me aside,” Bernard says, “but there was one crucial detail in them taking me aside. They didn’t put their arm around my shoulder.”

Can the producers assure loyal viewers of 24, on the heads of their dead or dying grandmothers, that they won’t have to suffer through the spectacle of Kim being kidnapped again?
“We don’t like to repeat ourselves, if we can at all avoid it,” Surnow assures the loyal viewers. “Not to say that we haven’t tortured 500 people on the show. We do try to keep ahead of the audience. And, by definition, that means not repeating yourself.

Is it possible for 24 to end a season without killing a regular character?
“Sure,” Surnow replies. “We’re going to kill one of the writers instead.” 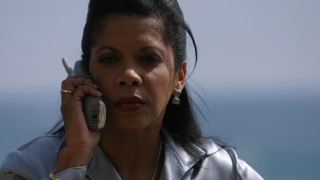