18 MONTHS OUT OF CTU, JACK SUDDENLY GOES BACK WHEN A COMMUTER TRAIN EXPLODES IN PART 1 OF THE SPECIAL TWO-DAY, FOUR-HOUR “24” SEASON PREMIERE EVENT SUNDAY, JANUARY 9, ON FOX 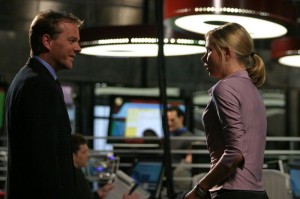 Eighteen months after the conclusion of Season 3, CTU has a new leader, Erin Driscoll, a steely government agent who made firing Jack one of her first priorities. After the explosion of a commuter train, Jack, who is now working for Secretary of Defense James Heller and also is romantically involved with Heller’s married daughter, Audrey Raines, suddenly finds himself heading back to CTU for a meeting with Driscoll in Part 1 of the special four-hour season premiere of 24, “Day 4: 7:00 AM-8:00 AM” and “Day 4: 8:00 AM-9:00 AM” Sunday, Jan. 9 (8:00-10:00 PM ET/PT) on FOX. (TWF-401/402) (TV-14 V/TV-14 V)