Marc Ostrick looks back on 24: Conspiracy

Marc Ostrick has done a blog post looking back on his work for 24: Conspiracy.

One of the things I quickly learned once I started producing and directing after NYU, is that finding work is a mixture of talent, tenacity and luck (and not specifically in that order). The other lesson is that good work always leads to more good work.

In 2005, I was producing/directing/editing behind the scenes documentaries for DVDs. These were mostly for feature films and TV shows. I created material for Daredevil, The Shield, School Of Rock, The Commitments, The Harold Lloyd Box Set and many more.

Another project I happen to be working on was the TV show 24. I created a 90 minute documentary following the cast and crew as they created the season 2 finale. We shot the documentary in the style of the TV show: 2 cameras (one wide and close, the other telephoto and roving), snap zooms, backlighting, split frames, same sound fx, etc…

The piece came together and everyone on the show really thought we did a good job. At the same time, Fox had just made a deal with Verizon to create programming for their new 3G cell phones. They wanted to create a spin-off of 24. When the question came up to the producers of the show, “Who should we get to make the series?” Everyone said, “Get the DVD guy.”.

Being able to play in the fiction sandbox again was a great experience. However, this whole endeavor was a big experiment. We were not going to be using the cast members from the TV show. Our budget was a fraction of the cost to produce one episode. We were doing this non-union.

Now that a few years have past, I can look back and see the shortfalls. The biggest problem was not having the cast. I’m not sure why someone would want to pay to see unknown actors when they can watch Kiefer for free every week on Fox. In this case, the rationale was that people would pay just to say they watch video on their phone (which was true at the time). However, the novelty of the 3G technology would quickly fade. Which leads to the next big issue. Just because the technology is there, doesn’t mean people really want to watch TV on their cell phones – unless there is something that is truly unique about the experiencing the content on a phone than any other medium. This is one reason why the mobile content market has not caught on yet (especially for original programming). No one is creating anything that NEEDS to be seen on a cell phone in order for an audience to get the full impact of the story.

But at the end of the day, I was really proud of the work. Fox execs and the 24 producers were also happy. I thought our episodes had the same style and tone of the TV show, great production value, action and pacing. And it’s always great to say you were the first at something. In this case, 24: Conspiracy was the first series made specifically for mobile phone. That year, we were nominated for an Emmy award in the new category of new media programming. 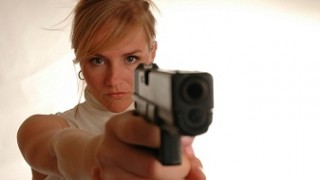