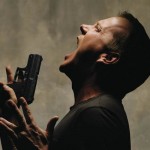 Kiefer Sutherland was interviewed on The Chris Moyles Show and has reiterated that the 24 movie may be set in London.

24 star Kiefer Sutherland has said that a proposed movie version of the hit series could be set in London.

Speaking on Radio 1, Sutherland, who plays Jack Bauer, also said it was likely a film would take place after the television series has ended.

“When we have talked about doing a film, which will take place after the series has finished,” he said, “England has always been a part of that discussion.”

24 is currently in its seventh season.

A feature film has reportedly been in the pipeline for a number of years, and rumours of filming scheduled for the break between the sixth and seventh seasons circulated.

“England really mattered to us so much,” explained Sutherland of the programme team’s attachment to the UK, “because I don’t know if a lot of people understand this, but the show broke here.

“We didn’t have a really strong audience, it took us a long time to build in the States, whereas the show took off here right away, and it was the success of the show here in England that allowed us to continue working in the States, ’til we built up an audience.”

The seventh series, set mainly in Washington DC, was delayed for a year due to the US writers’ strike, something which had worried the actor.

“We were really nervous coming back after a year and a half, a year, it’s a lot to ask of the fans of this show to have waited. And they came back in the States and they’ve come back here in England.”
Sutherland also joked about the difficulties of keeping to the show’s ‘real time’ format.
“We had to all keep each other honest about it,” he explained.

“I remember sitting with the writers and going, ‘Look, it’s impossible to get from Pasadena to Santa Monica in two hours, let alone half an hour, let alone the ten minutes that you’ve allotted for this to happen. If we’re gonna do the real time thing we need to take it seriously’.

“And just as I had said it, a helicopter started coming over the horizon, and the writers smiled and looked at me and said, ‘That’s your ride’. And so I was humbled there!” 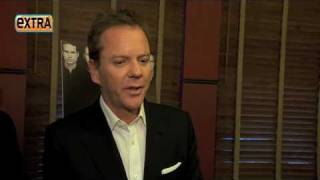 Kiefer Sutherland hopes to start ’24’ movie within a year

Kiefer Sutherland is asked by “Extra’s” AJ Calloway about the 24 movie and he says they hope to start filming in December or January. “It’s a very difficult thing to take something you’ve done for eight years, almost two hundred episodes, and try to find a story that’s going to be unique and yet service… View Article