All in all, this was a great episode that did one very important thing: it moved the story forward constantly, and didn’t get too bogged down in details and stalling tactics.

In one episode we’ve seen the rods arrive in Manhattan, get assembled and moved into place and be armed; we’ve seen President Taylor’s staff turn on her and we’ve seen Jack kick some much overdue ass.

Before I address tonight’s exhilarating episode, attention must be paid to Friday’s news about the show’s series finale on May 24. The announcement wasn’t necessarily a surprise, but it was bittersweet nonetheless; it’s always sad when an old friend leaves our living room for good, and it could be a long time before we see another terrific anti-hero like Jack (or The Shield’s Vic Mackey!) on our small screen.

Meanwhile, I thought the pace of the episode’s action was remarkable and never let go with a few unforgettable moments of heart-pounding, tense drama.

As Jack and Renee attempted to move President Hassan and his family out of the U.N., that tunnel scene was well-orchestrated and fantastic to watch. Amidst the clips being reloaded and smoke grenades being tossed, the situation seemed to escalate with every passing moment. Also, the stern words delivered by President Taylor and Brian Hastings were fitting sermons that made all of this FEEL like an authentic crisis. Hastings has flat-out been on a “blog-love” streak for about a month now, and I hope he keeps it up.

Summing it up, this was a stellar episode that hit us from all angles. Its always a good sign when the clock beeps for the last time, and we all take the patented gasp knowing we have reached the end.

Kudos to Cherry Jones, for giving lending such gravitas and commitment to Taylor’s speech about why she would not consider handing Hassan over to Samir. It takes an actress of Jones’ caliber to invest a speech like that with total commitment and damn if she didn’t seem as much like a President as one could hope for in that moment. 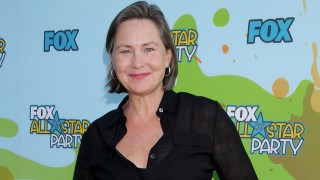 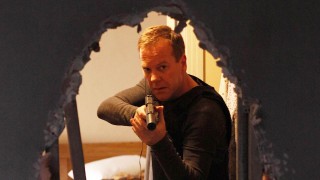 March 31, 2010 at 9:12 pm
Cherry Jones did sound like “a real President” because before she was a Broadway star she was a US national debate champion and has been a life-long history buff and a news hound. So she knows her stuff.

Last night’s episode of ’24’ was fantastic because it stayed with one tight storyline. That’s what was missing from the early Season 8 episodes – too many new characters, too slowly developed. Too bad the debut of Season 8 was right when America was pre-occupied with the Olympics.

Now TV watchers of America, looking for some diversion, are busy with new seasons of Dancing with the Stars and American Idol.