Jon Cassar says movies have “caught up to 24” 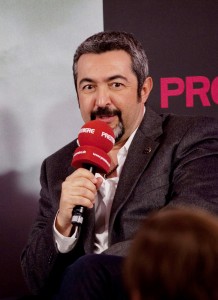 Former 24 director and executive producer Jon Cassar was interviewed by CraveOnline about working on 24, his interesting thoughts on the 24 movie (which he is not involved in), and his new upcoming series Terra Nova. Here’s the 24 stuff:

CraveOnline: After eight years of 24, were you just like, “You know, I need a challenge?”
Jon Cassar: Yeah, so I went and did The Kennedys. Then after The Kennedys I said I needed a challenge and I went and did Terra Nova. Look, it’s fun as a director to do all sorts of things. This was going to be a challenge and I knew that, and look, my wife keeps telling, “Can’t you just take something easy for a change? Can’t you just take a nice little family drama that takes place in the living room?” and I just keep somehow saying no to those. So, yes, I did pick it as a challenge.

CraveOnline: I really thought that Jack was going to go home to his family in hour three of that last year.
Jon Cassar: Just didn’t happen.

CraveOnline: Was it a big shock when the Billy Ray script didn’t move forward for the 24 movie?
Jon Cassar: Not completely for me just because, remember, we did eight years of 24 and twenty four episodes a year. We mined a lot of story, and the other thing is, quite honestly, I think it’s difficult. The reality is that it’s difficult to do that story because everyone is caught up to 24. I mean, 24 was an influence as far as I think on movies. I think it influenced stuff like The Bourne Identity. It influenced a movie like Salt. You could’ve gone to any of those movies and made that character Jack Bauer and you had your 24 movie. So, I think we sort of fell behind a little, I guess, if you want to think about it that way because all those stories were done. I think that’s part of it, to try to find something new that isn’t going to be a Bourne Identity, isn’t going to be a Salt, not going to be one of those other movies. It’s tough. Even Taken was very much like 24. He was chasing his daughter. So, we mined all that material all ready. So, find a new thing. Not easy.

CraveOnline: It does seem like 24 invented daughters getting kidnapped.
Jon Cassar: That’s very true, actually. We were very good at it.

CraveOnline: Three times in season one I think.
Jon Cassar: Well, yeah. She was kidnapped for one very long time in season one and then it happened in two, I think, and then in three, maybe, too. I don’t remember. But yeah, you want your hero personally involved. That was always based on that.

CraveOnline: That was part of the fun, too, her getting saved midseason and then wondering what would happen next, right?
Jon Cassar: Yeah, but I think it was brilliant on the writer’s part in that first year. I remember watching that show, and look, everyone was doing special agencies and I did La Femme Nikita with Joel Surnow. We did it years ago, and so everyone was always doing that, but the twist that they put in it was the fact that his daughter was stuck in L.A., downtown at night. That changed everything because I can’t identify with Jack Bauer running around getting terrorists, but I can identify with my son or daughter being lost in downtown L.A. So, that made it all different, and I think that they knew that right away which is why they did it as much as they did. That’s why movies do it, too. You want that personal connection.

Here are several videos and interviews from some 24 Marathon Challenge contestants, many of them travelling from far away to participate in the challenge. Jon Cassar chats with fans who flew out from Puerto Rico:

Scott Ellis of The Sun-Herald interviewed Jon Cassar about the filming process behind 24. In a cold, dark paddock of a ranch outside Los Angeles, Kiefer Sutherland is standing in front of a heater, warming himself between takes for series three of 24. Once again, the clock has started ticking for Counter Terrorism Unit agent… View Article

September 6, 2011 at 3:57 pm
I love 24. The whole 24 team set a new mile stone with that show. I really enjoy these big turn arounds where your friends become suddenly enemies and of course the opposite.
personally I just want to see that jack recovered from day 8 and is safe with his family.
if this would be in a feature movie or a season 9,doesent matter.
just give us something to keep the fans alive.

September 7, 2011 at 2:40 pm
24 was a ground-breaking show. Just like The West Wing and Seinfeld, they went beyond what was thought as “possible” on Television. Seinfeld adressed taboo issues, The West Wing tackled complicated political issues and 24 tackled Terrorism (after 9/11, one might add).
And now, 10 years after that horrific day, I can say with certainty, that all action movie writers, once they sat down on their desks to start writing a new movie think (and have thought for the past decade): “I’m gonna do a 24.”
But none of them could reach its level. Yes, they mirrored its tropes, yes they made great action sequences, but they never reached 24’s level of DRAMA.

What writer would try to mirror Teri’s death? The Palmer attempt at the very last minute of season 2? Having a virus released in a hotel and watching the people infected die? Paul’s death? PALMER’s death? Letting Jack kill Curtis and having a Nuke go off 5 mins later? Reviving Tony and have him be bad? Killing Hassan and Renee in two STRAIGHT episodes, getting your hero ona deadly rampage (which made sense given everything he’d been through) and still end with a tearful scene (Jack & Chloe *sniff*)? And most importantly, surprising us with a last second twist (a countdown clock instead of the normal clock).

24 will never be meet its match. Every single award it won gave credit to where credit was due (and it deserved more).

Shoutout to 24!!! You’ve left an empty space on monday nights, in our minds and in our hearts !

Goodbye, see you on the big screen.

September 19, 2011 at 2:33 pm
” Killing Hassan and Renee in two STRAIGHT episodes, getting your hero ona deadly rampage (which made sense given everything he’d been through) and still end with a tearful scene (Jack & Chloe *sniff*)?”

Killing Renee shouldn’t be considered “groundbreaking”. Stuffing a heroine into a fridge for the hero to go on rampage is a cliche and tired plot device that has been used thousands times before. Plus, the payoff in the following episodes isn’t that good as some people claimed anyway. All writers did in the end of episode 17 was nothing but a shameful display on how much they lost touch with the fan base in general.