Here’s a comprehensive collection of reviews and recaps for 24: Live Another Day Episode 5. The vast majority of critics were very positive on this hour, although a few critics labeled this a filler episode or criticized it for repeating past storylines. Check out the reviews below.

The A.V. Club (A): “I mention all this because the reason “3:00 PM—4:00 PM” works so well is that there’s no real contrivance in it. There are characters who disagree, and often those disagreements prevent the “real” heroes (ie Jack, Chloe, and Kate) from getting the job done, but those disagreements all come from rational, even reasonable places. ”

Vulture (5/5): “Characters that felt perfunctory (like Benjamin Bratt’s Navarro) and story lines that were underwhelming (like the family dynamic inside the Al-Harazi hideout) clicked this hour. Nothing felt like filler. This is what 24 does best: It hooks you right when you least expect it. Before you know it, the hour is over and you’re ready for more.”

IGN (6.8/10): “But it is easily the least essential of the season thus far, as the bulk of the time is spent moving pieces into place for the coming weeks. And after last week’s largely action-free but still very compelling hour this week can’t help but suffer in comparison, as it too has little excitement until the closing minutes.”

HitFix: “Tonight’s episode was more sprawling, but extremely satisfying in its own way. It kept Jack silent and mostly off camera for the first half, yet was compelling because this has turned out to be one of the show’s stronger ensembles in a while, whether returning figures like Heller or newbies like Kate and Margot.”

Screen Rant: “There is a great deal left unspoken between the two, but Jack’s acknowledgement of his past actions and the sentence they may yet see carried out against him, works to unify his arc with that of Heller and Al-Harazi’s. The notion of sins of the past coming back not simply to haunt characters, but to influence their present day actions resonates rather loudly here – and even spreads into the threads of Kate Morgan and Chloe, to a certain degree.”

TV.com: “24 will never be Mad Men, but it’s displayed a certain amount of care in developing Live Another Day‘s supporting characters—a care that was absent during 24’s last few years on the air—and that has made solid episodes like this one just a smidgen better.”

Paste Magazine: “24: Live Another Day is shaping up to be one of the better seasons in the franchise, and it’s not because of the action. Instead, it’s because of the moral ambiguity of the characters.”

Den of Geek (4/5): “24 delivered one of its most eventful and emotional episodes in some time, finally capitalizing on the drone plotline and getting us closer to an all-out Jack Bauer assault that the fans so badly crave.”

NY Daily News: “A tick past four hours into the season of “24: Live Another Day,” and the show has finally turned back the clock to its glory years a decade ago.”

Buddy TV: “Over the course of nine “seasons” on television, it’s naturally going to be difficult to maintain the element of surprise. This week’s episode of 24: Live Another Day feels like one of the more predictable episodes in a good long while, but at least the characters started to see things only moments after me.”

TVLine: “I was never the hugest Jack/Audrey fan (#TeamRenee), yet found myself suitably moved by their extended session of forehead sex.”

Kotaku: “But… now that we’ve all gotten over the highs of of 24 actually being back on the air, it’s hard to ignore the fact that this all just feels like a remix of old seasons. We’re in London now, yes, and there are some truly insufferable conversations about the morals of drone strikes, but other than a few tweaks, we’ve seen this all before.”

Screen Crush: “Although last week’s episode saw ’24: Live Another Day’ slow down for a more tense hour, this episode slowed down even more and the results are a little dull. There’s almost no story momentum in “3:00 P.M. — 4:00 P.M.” and virtually every scene is characters updating each other on what everyone else is doing.”

Pop-Break: “Last week we said if 24: Live Another Day didn’t keep the pedal to the metal for a 100mph white knuckle pace, the show would really suffer. This week, that theory was proven somewhat wrong. Monday’s latest chapter, “3:00pm-4:00pm” showed what could happen when the focus of the series is put on its strongest supporting characters and not on constant run-and-gun action.”

We Got This Covered: “The team behind 24: Live Another Day deserves much credit for limiting Kiefer Sutherland to about four minutes of screen time in this episode but still managing to ratchet up the suspense and hold our attention. That the series is able to squeeze in a lot of compelling storylines without continually resorting to Jack Bauer’s cunning threats and tactics shows that the 24 is not just a relic of the Bush era, but a dynamic thriller that can work in the context of any administration.”

She Knows: “The real emotional moments in this episode came from Jack and Audrey’s reunion. It was a touching scene, especially when the two of them touched their foreheads together and spoke in reassuring whispers.”

Geeks Unleashed: “Kate’s meta response – “It wouldn’t be the first time this happened today” – sets the tone of the episode, an hour that, while entertaining in a vacuum, is essentially a retread of stories we’ve already told in previous episodes (and in some cases, seasons).”

Boston.com: “We need to give “24: Live Another Day” some credit for the show’s gradual rediscovery of what made it so great in the first place.”

Bitch Stole My Remote: “How awkward is that scene when Jack and Audrey reunite? I wasn’t a fan of this pairing the first time around, and their little head bumping did nothing for me this time around.”

Starpulse: “We’re rapidly approaching the halfway point of Jack Bauer’s return, and so far 24: Live Another Day has been as turbulent for the audience as it has for Jack. The show’s been up, it’s been down, and now it’s starting to get crazy with drones everywhere and Benjamin Bratt finally getting out from his office. Just when you think you know 24, then an episode like this happens.”

TV Equals: “One of the places where the show is clicking is with Michelle Fairley’s work at Terrorist HQ. I enjoy watching Caitlin Stark dominate all of those scenes with a brand of villainy that is somehow cartoonish but legitimately terrifying.”

CNS News: “This episode certainly upped the ante in terms of action and featured twists and turns in terms of plot. It also brought the show into the debate over the morality of drones and the civilian casualties that too often accompany their use.”

Digital Spy: “But while it’s somewhat clumsy in its shifting of its key players, this edition of 24: Live Another Day does deliver on the promise of earlier episodes – paying off the lingering tease of a reunion between Jack and the Hellers in two short but oh-so-sweet scenes.”

Pop-Topia: “Naveed is perhaps one of the worst characters in the history of last minute change of hearts. Not only is he unsuccessful at it, but he’s so incompetent that he gets caught at every turn. A bullet in the head may have killed him, but saved us all from his Inspector Clousseau-like bumbling for the rest of the season.”

The Guardian: “This is an episode set in London between 3pm and 4pm. The fact that nobody had to battle through a horde of schoolgirls Snapchatting each other outside a branch of Chicken Cottage might be the show’s least realistic moment so far.” 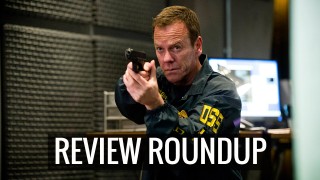 What did critics think of 24: Live Another Day episode 4? Continue reading to find out!