Extracting information from a cast member of “24” about the show’s plot is a little bit like tracking down a picture of Britney Spears with her midriff covered. It can be done, but it takes a while.

For instance, here’s what Wendy Crewson, who joins the show in Tuesday’s (Oct. 28) season premiere, has to say in response to a question about what she can reveal about her role:

“I’m always so nervous that I’m going to say something I shouldn’t. You’re always stopping yourself. Um — well, my character’s name is Dr. Ann Packard, so there we go. We know I’m a doctor. And [pause] I am involved with one of the, you know, male leads. [longer pause] And I think maybe that’s all I can say right now.”

And she’ll eventually be involved somehow with this season’s bioterrorism plot, right?
“Prob-ab-ly,” she says, stretching out each syllable. “Maybe.” She does acknowledge that pretty much every character eventually gets wrapped up in “24’s” real-time stories, “and the great thing is you never know what side you’re on until something happens. And even then it doesn’t necessarily mean anything.”

Dr. Packard’s field of expertise and the object of her affections are revealed in the season premiere, so she won’t have to keep that secret much longer. Even before Crewson became part of the series, though, she was privy to the secrecy that surrounds it.

Crewson is a close friend of Leslie Hope, who played Jack Bauer’s (Kiefer Sutherland) wife, Teri, on the first season of “24.” She was one of only a few people outside the show to know ahead of time that Teri would die in the first-season finale.

“I kinda knew, I hate to say,” Crewson says. “She wasn’t going to tell anybody, but it was a traumatic thing for her. Those things are hard to keep [secret] — it’s not that she was telling the world, she certainly wasn’t, but there were a few of us.”

A native of Hamilton, Ontario, Crewson is probably best known for her roles as President Harrison Ford’s first lady in “Air Force One” and in the “Santa Clause” movies. She also has extensive credits in Canada and just won a Gemini Award — the Canadian equivalent of the Emmy — for the TV movie “The Many Trials of One Jane Doe.”

Her schedule on “24” — she’s signed to appear in a third of the season’s episodes — allows her to work in Los Angeles for a week or two, then fly home to Toronto to spend time with her family.

“I can be up there taking care of the kids in school and all that, then come down here and have a blast doing this,” she says. “It’s kind of a perfect life, really.”

Except for the clothes. Because each season of “24” is only a single day, the characters for the most part are stuck wearing the same thing. Several weeks into shooting, Crewson hadn’t even had the chance to remove her jacket.

“I keep thinking, what would happen if in the middle of a take, I just spill a cup of coffee on me? Can we change then?” she says. “Wouldn’t she have a change of clothes somewhere she could slip into? … After a while, it’s like your maternity clothes — you just want to put them in a pile and burn them afterwards.”

The many plot threads of “24” mean that certain cast members may not even see each other on set, so Crewson keeps up by reading the scripts as they come to her. “You could get by just reading your own [lines],” she says, “but it’s always nice to know the shape of the story and where you fit into it.”

Which is not to say she knows exactly where things are going.

“I picked up these latest two scripts and I just went ‘Whoa — what?'” she says, laughing. “I was completely knocked out by a couple of the twists [the story] took. I never saw that coming, and I had no idea they were going to do that.”

Of course, she can’t say what “that” was. 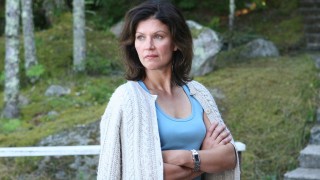 Jenelle Riley of Backstage.com has interviewed new 24 cast member Wendy Crewson who plays Dr Anne Packard in the third season. Who she is: The elegant and stunning Wendy Crewson has made a career out of playing smart, strong women thriving in a man’s world. In America she is probably best-known as the no-nonsense wife… View Article