Who she is: The elegant and stunning Wendy Crewson has made a career out of playing smart, strong women thriving in a man’s world. In America she is probably best-known as the no-nonsense wife to Harrison Ford’s President in Air Force One or as the wickedly unsympathetic physician in The Doctor. There must be something about higher office and healing the sick that appeals to her, as she can currently be seen in the hit television show 24 as the doctor and love interest of President Palmer, played by Dennis Haysbert. Hopefully, her Dr. Anne Packard is a little better at her job than the brisk physician she played in The Doctor, a role that apparently made an impact on those in the medical community. “A friend of mine is the head doctor in the emergency room at Oakland Children’s Hospital, and she’d go to conferences where they would show clips of how not to behave, and it would be me in The Doctor,” Crewson said, laughing.

Playing the truth: Landing the plum role on 24 was made extra sweet for Crewson because she didn’t have to audition. She recalled, “I just got a call saying, ‘Would you like to do this role?’ And I thought, Is that a trick question?” She added that it’s thrilling to work alongside Haysbert. “Not to kiss and tell, but it’s every bit as great as you’d think it would be.” Crewson was able to tell little else about her character, as 24 is notorious for keeping its storylines secret. “Here’s the whole thing about these characters: you don’t know who you are, they haven’t been written ahead, they don’t know who you are. So it’s sort of a week-by-week revelation. It’s a little weird, but all you do is play the truth of the moment. And whatever comes along down the line, it is what it is.”

Also a fan: Crewson was a fan of the show from the first season, when her good friend (and fellow Canadian) Leslie Hope starred as Kiefer Sutherland’s wife. “I was really hooked on it, and I was so mad when they killed her,” admitted Crewson. “But I sort of got sucked back in during the second season and couldn’t stay away.” Hope also warned her about the fanaticism of 24 fans, something Crewson had never experienced. “I’ve never been on a popular TV show before, so this is a whole new experience for me,” said Crewson in an interview the day before the 24 premiere. “I’m going to get my grocery shopping done now, just in case.” 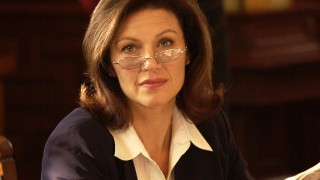 Extracting information from a cast member of “24” about the show’s plot is a little bit like tracking down a picture of Britney Spears with her midriff covered. It can be done, but it takes a while. For instance, here’s what Wendy Crewson, who joins the show in Tuesday’s (Oct. 28) season premiere, has to… View Article