ADONI Maropis, the actor who plays this season’s supervillain on “24” is drawing on some real-life experience to play the role: His own father was seriously wounded in a terrorist attack.

Maropis was 10 years-old, and home in Pittsburgh in August 1973 when he learned his father had survived an attack by two terrorists who opened fire with machine guns and grenades in a departure lounge at the Athens Airport.

Three people were killed and 55 wounded in the attack, which was carried out by members of Black September, a PLO offshoot.

“A hand grenade hit him in the knee,” said Maropis in a phone interview from Los Angeles, where he was preparing for another long, grueling day on the “24” set. “He thought it was a football or a bottle flying at him in the air. It bounced away and exploded.”

Shrapnel struck him in the legs. When he returned home, his son was shocked to hear his father say that, in spite of everything, he understood the terrorists’ plight.

Maropis remembers his father saying, “Understand where they’re coming from,” a piece of advice the actor is using to play Abu Fayed, the stone-faced Muslim mastermind of this season’s conspiracy to detonate a series of dirty nukes across the U.S.

“This guy comes from a deep, passionate place,” said Maropis, 43, whose name is pronounced Ah-DAHN-ee MA-roe-pis. “He sees himself as righteous, noble, a freedom fighter. You can’t reason with him because his belief system is so strong. That’s what makes him so evil.”

Maropis was born and raised in Pittsburgh. His parents are both Cretan, which makes them Greek since the isle of Crete has been part of Greece since 1912.

He’s been a journeyman actor for about a decade, guest-starring in episodes of “Walker, Texas Ranger,” “Angel,” “JAG” and “NYPD Blue.” His movie credits include small roles in “Troy,” starring Brad Pitt, and “The Scorpion King,”starring Dwayne “The Rock” Johnson.

Now, though, with the new, sixth season of “24” getting off to a flying start, he concedes that this role is the biggest one of this life. “My God, there’s so much buzz about it,” he marvels. “I thought ‘Hidalgo’ was my biggest role before, but this . . .”

Maropis has high praise for the cast and crew of “24,” agreeing with a description of the production as “a well-oiled machine.”

It is not easy work, however. The hours are long and many of the roles, including his own, are physically demanding.

Moreover, Maropis has had to learn Arabic – not fluently, but well-enough to sound like an authentic Arab. (He says Fayed is probably a Saudi.)

Not that anyone would accuse the actor of actually being a terrorist, Maropis wants it known that he is nothing like the man he plays on “24.”

“The reason I’m in this business is because I’m a silly, goofy guy,” he says. “I do impersonations. I used to perform for my parents and my friends. I used to do everybody – Ed Sullivan, Richard Nixon, Paul Lynde, Flip Wilson.

“I could have played Truman Capote,” he insists, impersonating the author’s distinctive voice over the phone. “I just don’t look like him!” 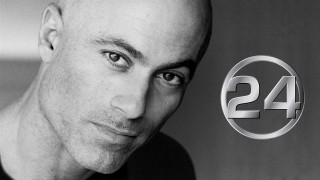