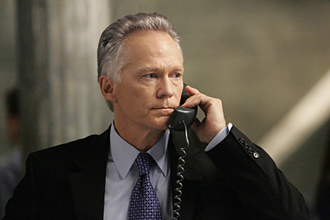 On the Fox drama “24” Bill Buchanan, the stoic, by-the-book chief of the Counter-Terrorism Unit, is the steady face of calm in a maelstrom of frantic activity. No matter what the crisis — exploding nuclear bombs, deadly virus attacks or political assassinations — Buchanan is a rock, and he remains unshaken as Jack Bauer and company race to save the day.

That’s why when Buchanan briefly lost his temper after the nuclear terrorist Hasan Numair escaped the unit’s grasp in this season’s fourth episode, it was as explosive as anything else that hour. “We have to do better than we’re doing and we have to do it faster,” he yelled at his staff in a show of emotion that was both uncharacteristic and memorable because of it.

But it’s his unwavering composure that makes Buchanan essential. “We feel like we don’t want to take his hand off the steering wheel because it’s so steady,” said Howard Gordon, an executive producer of the show. “He’s sort of the grown-up in the room, the straight man for other people who certainly make it a more colorful place to watch.”

Mr. Morrison’s take is that “workers relate to this guy because he’s willing to question his own decisions and beliefs and allow the people around him to blossom and to be themselves because he trusts them.”

Buchanan is straight-laced and buttoned down, but Mr. Morrison’s career has been an eclectic one. Raised in Anchorage, Alaska, he would often take jobs with his father, who worked at a construction company, building highways. Mr. Morrison began his acting career as a clown and tightrope walker for the Carson & Barnes Wild Animal Circus. He said he didn’t enjoy the experience and quit after injuring his back in a fall. “But it did prepare me for being an actor,” he said, “because as bad as it can get in Hollywood trying to make a living, nothing compared to how bad it was in the circus.”

He worked as a truck driver, waiter, furniture stripper, landscaper and busboy while crisscrossing the country acting in regional theater, doing small movie roles and making television appearances on shows like “Quantum Leap,” “L.A. Law” and “Frasier” (he played Lilith’s new husband). He landed his first regular role on the Fox science-fiction series “Space: Above and Beyond,” in the mid-’90s, and got the role of Buchanan on the fourth season of “24.”

Mr. Morrison is also a certified yoga instructor and has been teaching at the Center for Yoga in Los Angeles for five years. He said yoga helped him in playing Buchanan. “There’s so much insanity and so much dysfunction in the story that it craves an element of balance,” said Mr. Morrison, who lives in Los Angeles with his wife, Riad Galayini, and their 7-year-old son, Seamus. “I’m a yogi, and that’s what I try to bring wherever I go.”

Now that he is a mainstay on “24,” he said, he no longer asks the show’s hairdresser every week if his character has been killed off yet. But asked if Buchanan would ever bite the dust, Mr. Gordon said: “The prospect of it is so nauseating to me, but as we all know, no one’s ever completely safe on ‘24.’ I will say that if we were to do it, it would have to be an extraordinary death.”