The Paris Post-Intelligencer interviewed Cherry Jones, who is up for an Emmy nomination tomorrow for her role as President Allison Taylor on 24. She mentioned that her part isn’t quite as prominent as it was last season.

Jones spoke earlier this week while leaving the set of “24.” She said she had just finished filming her part for episode 10 of the upcoming season, and she offered a few glimpses into the next run of the show.

“My part is much lighter this year,” she said. “When I first got to work for episode one, the producer came to me and said ‘I apologize for your anemic storyline, but we haven’t been able to figure out what to do with President Allison Taylor.”

Jones isn’t bothered by the reduction.

“That I even got to come back this season was a gift,” she said. “I didn’t expect to come back. Presidents don’t last very long in ‘24.’”

Jones said she has been in almost every episode through episode 10, but she’ll likely be used more sporadically for the rest of the season.

She also said that Freddie Prinze Jr. will be joining this season’s cast. He walked by Jones as she was speaking.

“I hadn’t worked with him (before),” Jones said.

“I grew up watching his father, so it’s funny to see Freddie Prinze Jr. walking around. He reminds me so much of his dad.” 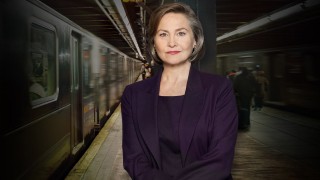