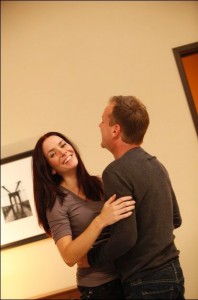 Time’s up for yet another pivotal cast member on 24.

In a shocking twist on the show’s April 12 episode, former FBI agent Renee Walker — played by Annie Wersching — was killed by sniper fire shortly after a love scene with Kiefer Sutherland’s Jack Bauer.

“I’ve known since the beginning of the season that this is what they wanted to do,” Wersching tells PEOPLE. “They really wanted Jack and Renee to get really serious in as much as you can in a show where you are trying to save the world at the same time. They wanted him to be in a good place with her and have that happen to her and have that be the catalyst to send him off completely on a bloodbath!”

In the end, Wersching was more nervous about her love scene than her death scene. “The actual filming of those days were kind of masked because Kiefer and I had to shoot this love scene. I was nervous enough about that, that I was like, ‘I get shot? Big deal! How I am going to deal with this part?’”

Adding to the onscreen drama, Wersching, 33, learned that she was pregnant with her first child the day after filming her two-day love-and-death arc. But since she filmed those scenes back in December, she’s had to hide the fact she knew Walker’s fate early on. “The big question is, ‘Well, what was it like running with a gun while you had morning sickness?’” says Wersching, who married actor Stephen Full last September. “And I was like, ‘Uh, yeah, that was hard. That was really hard!’”

Also tough was finding out last month 24 would end its run after its eighth season. “As an actor, I know roles go away,” she says. “You get another job. But as a fan, I’m just sad we won’t keep learning about what keeps happening in Jacks life and Chloe’s life. I’m sad that in the theoretical world of what keeps happening to them, that Renee isn’t off doing something is very sad.”

So what’s next for Wersching, who is due in August? The actress originally auditioned for a few fall TV pilots but says, “I was honest in that, ‘I would love to do your show, but I’m going to have a baby probably in the middle of when you’re going to start shooting!’ So … I’m taking it easy.” – Cynthia Wang

For more from Wersching on her 24 farewell, pick up PEOPLE magazine on stands Friday

’24’ is almost over, but Jack Bauer is about to face one of his toughest challenges yet — trying to start a romantic relationship with Annie Wersching’s Renee Walker. Jack and Renee take a well-deserved break from kicking bad guy ass to explore their romantic feelings for each other on tonight’s much-anticipated episode. I recently… View Article

April 13, 2010 at 7:43 pm
Annie might’ve been prepared for her character’s death, but I sure wasn’t. There’s been a lot of debate over Renee’s strength; personally, I loved her, and while I can see why people would say otherwise (okay, yeah, she *was* a little nuts), I think it was a bit unnecessary to kill her off so quickly. The plot device would’ve sat better with me if a season 9 was in the making, but with this being the final hours, I can’t help but feel bitter for this lack of closure I’m feeling. I don’t know; maybe I’m being silly, since this is ’24’ and all, and it’s obviously a very tragic show with a very tragic protagonist. It was never supposed to be about romance. Still, it’s tough seeing Jack go through this again. Very heartbreaking.

On a brighter note…I’m looking forward to seeing some Bauer Power Rage from here on out. Let’s see him f*ck some b*tches!

Especially as many of us feel like it did not, and should not, have gone down like this. So wrong.

April 13, 2010 at 11:14 pm
Whether everyone thinks it was a well played move or the writers being cheap, one thing is for sure. Everyone cares for Renee. There are people who are calling this a cheap escape for the writers, those people simply care about her too much to really believe she won’t ever be with Jack. The writers said today, Annie said today, that they had this planned from the start. Day 8 was always meant to be the tragedy of Renee walker. I believe that storytelling is best when you truly feel for a character. Much like we do with Renee. Death on 24 has been common. Death on almost any show generally shows up. Renee’s death however, hit me in a way that the rest never did. I felt for Renee and while I want nothing more than for Renee to somehow come back, I won’t lie when I say that the sequence was beautifully played out.

The writers killed her for a reason. A reason that we may not know until the final episode. But I trust that it will be a good reason and that she will not have died in vain.

It’s been a hard day for Jack. It’s almost over though.

You were brilliant Annie.

April 14, 2010 at 12:14 am
i agree. there should have been a better reason than because of she recognized the sniper that injected Samir.

April 14, 2010 at 1:24 am
@ronn I’m sure we’ll slowly figure out what that reason is. It’s the final seven hours after all. While I’m sure they’re going to leave things open for the eventual 24 movie, they’ll still us some closure.

Knowing the writers and what they’ve done in the past, there’s more to Renee than we’re aware of right now. They’ve spent the entire season planning the ending of this weeks episode. I’m eager for these last few hours. I’m really curious to see how they tie it all up after eight very long days

so any thoughts on those finale set pics?

I believe that they’re one of two things.

The opening scene, so then the finale will be spent trying to save Jack’s life and something from that could lead into the film. They could save him, yes, but something from it wil prove crucile to the films sotryline.

The ending scene. The day will be over. Jack will probably be escorted somewhere, he’s trying to to be happy. So he’s in a bad state. I’m not sure what the next seven hours will bring us, but it’s gonna take him to a bad place, emotionally. So he’s driving to who knows where and they’re ambushed and they take him. And so the 24 movie would be about rescuing Jack. Howard Gordon mentioned the use of old characters, so my guess is that if this is indeed the ending and the movie is about trying to get Jack back, that it’ll concern someone from Jack’s earlier past of the first few seasons and the few characters they can bring back will be brought back so they can help give information.

It’s definitely a long shot of things, but those were the only two that popped in my mind. Maybe we’ll be surprised and it’ll be something we never saw coming.

As for the next seven hours, I see Logan being revealed as someone bad. He seemed really eager to go to the Russians and judging by next weeks promo, him and the President disagree with how things are going to go down.

April 14, 2010 at 11:25 am
@Tyler
You really have faith that they will not have killed Renee in vain? I am just not sure. I would feel better if I could have faith too, and it would be nice to have her “presence” be there the rest of the season via Jack. You know what I mean?

I am worried that she will have died for nothing but a plot device and will never be thought of again.

24 has done some things in the past that I will never be able to forgive them of. Most of season six being what I mean. They mishandled what could have been a really good storyline.

This time though I do have faith that they know what they are doing.

They mentioned that they planned this from the start, so they’ve spent seventeen hours leading to her death. All show that it could spark off the final act of the series. They’ve come a long ways in seven and a half seasons. They’ve made mistakes, but they’ve also created a story worth spending nine years of my life watching. I only have this much faith in them that they made the right call on this because it is the last seven hours. And I’m sure that a great ending has been made and it will have been worth watching for nine years.

And maybe I’m wrong. Maybe in six weeks when the final has aired and the show is over, I’ll sit back and say that the show ended just before Chloe called Jacks’ cell phone. A happy ending for Jack.

Until then though, I’m keeping an open mind with things. It’s not over yet and I won’t judge their decision until it’s over. So check back with me in six weeks and we’ll see if my faith in the show was worth it or not.

Yes, this season has a slow start build up episodes but it’s all worth it. I started feeling the goosebumps back only during the EMP explosion.

For whatever it’s worth, we still have the final six hours and even without that, this season already succeeded previous days. Season six wasn’t that worst, i believe it has one of the strongest finale. Jack and Secretary Heller’s conversation was well written and Jack being at crossroads was great.

It’s definitely been worth it. I also agree that despite season six not being the strongest overall season, the finale was incredible. All seven finales have been incredible. I’m not worried about the end. I think it’ll be a great end to a great show.

And despite Renees’ death and everything, look at the bright side. Logan is back, so I’m sure it’ll be an exciting next few hours with him and President Taylor butting heads. Day 8 hasn’t let me down yet. New York will continue to be Jack’D