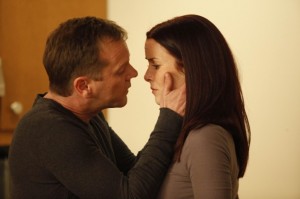 I’m pretty pissed off, but this makes me feel a tiny bit better. I still feel her death was unnecessary and the writers could’ve accomplished ‘Bauer revenge mode’ with Renee just being in surgery these last few hours fighting for her life.

Last night, yet another of Jack’s love interests bit the dust, this time his female counterpart, Renee. And while the outta-nowhere tragedy will no doubt spin our hero off into another vengeance-seeking spiral, I’ve got questions. Lots of questions. Like, was the decision to whack her made before or after the show’s recent cancellation? How did her portrayer, Annie Wersching, take the news? And most importantly, why was she killed?! Exec producer Howard Gordon phoned me to answer all of the above, and he tackled another burning mystery as well: Who determines how many minutes it takes for Jack to make love to a woman?

When did you make the decision to kill her off?
HOWARD GORDON: At the very beginning of the season. I even told Annie and Kiefer [Sutherland] that that’s where the story was going.

What was their initial reaction when you told them?
GORDON: They both got it because it was a pretty simple story, one true to form for the show. We really were looking for an emotional anchor for Jack, and it was brought up very early in conversations about where Renee was, what she was up to, and how they would reconnect. But the idea that Jack again has this chance at happiness at the beginning and somehow this person — who he’s influenced in the last year — chooses to make this decision that has had terrible consequences for her and Jack and for which Jack feels responsible was really the hook to me about why Jack is really sticking around this year… We knew Jack and Renee would get a chance to reconnect, but there’s always been the moment of breathless real-time sex that we’ve looked for during the last 9 years and it was something Kiefer and I talked about. And it felt like when else can they possibly do it than at the end of this story? And as you’ll see, the ramifications of [her death] are obviously what the rest of the season is all about.

Was there some doubt or internal debate about whether this was the right decision?
GORDON: Yes. We always have some doubt when we do certain things. We had a couple of thoughts and concerns, but the way the story fell it had to happen… My wife was literally in tears watching it. And when I can make my wife cry [watching 24], I know I made the right decision.

Where does Renee rank among the loves of Jack’s life?
GORDON: No one ever understood Jack more deeply than Renee, [so] she may have been his greatest love. Jack was always segregating — even with Audrey Raines, who he loved but who represented another world. A world that he had chosen to join and hang up his gun. So when that story started it was a very conscious choice on Jack’s part: I fell in love with this woman; I’m going to put on my suit and hang up my six-shooter. With Renee, she knew the worst part of Jack going in. Jack was the guy being brought up in front of this House Sub-committee and was a monster as far as she was concerned. He had done terrible things that were against the law that she could never imagine endorsing herself, but, of course, she finds herself in a similar position by the end of the season. Part of it, too, is that [jack] has never had a romance that was in real-time. We saw every moment that Jack and Renee were ever together. So in that sense, it was the most 24-specific romance ever.

I thought it was interesting that you cut away from Jack and Renee for two whole acts after they started making love. Did a lot of thought go into how long it takes Jack Bauer to make love to a woman?
GORDON: Oh absolutely. And, by the way, Jack and Renee were not by any means done. I think this was probably closer to Round 1. I mean, he was just getting a glass of water. So yes, we were very sensitive about it because it’s a very sensitive thing. We really wanted to do it as tastefully and virile-y as possible for a man like Jack Bauer.

I can only imagine how that conversation went.
GORDON: [Laughs] Trust me, it was a funny and a fun and a real conversation.

Was Kiefer involved in that discussion?
GORDON: Yes, he was.

How does Jack bounce back from this?
GORDON: He doesn’t. This is a game-changer for him. It’s like all deaths. He’s lost something he can’t get back. He has a way he wants it addressed, and if he doesn’t get satisfaction and justice, you know, he’s gotta find another way. But it really does set things in motion that are pretty profound for the character and it’s a place I don’t think he’s ever gone before. It’s as dark and complex and as combustible as any place Jack’s ever been.

Switching gears, your last day of production was last Friday. How’d it go?
GORDON: It was an incredibly emotional day. I’m just so incredibly proud to be a part of it… This has been an incredibly strong season. I can [only] judge it in terms of what my own opinion is of the show and what I hear about it anecdotally from the people who are friends and family, but I feel very proud of this year. Kiefer is very proud of this year. People are happy to be ending with such creative vigor. 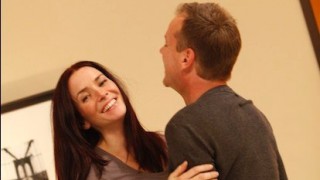 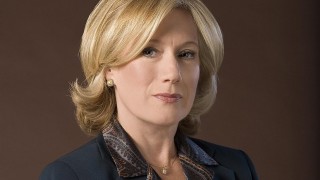 April 13, 2010 at 3:38 pm
I can’t even react to this properly yet because I am still so pissed. I think they took the easy way out creatively and did not do any justice to her character at all. She was not just “Jack’s love interest” – she was Renee Walker, a great character that many fans really cared about. I love Jack above everyone else – don’t get me wrong – but it would be nice to a few characters left alive besides him that we are actually invested in.

Sorry Mr. Gordon. I think you blew it.

April 13, 2010 at 7:52 pm
Her death broke my heart. In all honesty, I didn’t think she and Jack were “in love” but I still really liked her character. And they did have some decent chemistry. It just stinks that we have to see Jack get hurt like this again. It was bad writing, in my opinion; I understand why they did it, and it is a good catalyst to get Jack in the rage game, but I think there could’ve been other ways to accomplish that without killing a fan favorite.

With that said, 24 is a dark show. Can’t really fit in a fuzzy on-going romance, I suppose. Would’ve been nice, though.