A Final Farewell to 24 from TVSquad 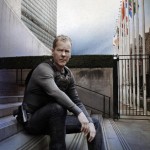 TV Squad has written a farewell post to popular shows that have ended their run this year including 24, Lost, and Law & Order.

Now, what does “culturally reflective” mean? That doesn’t mean that ’24’ was a somber think-piece of a drama. Far from it. What “culturally reflective” means is that it held up a mirror to what was going on in the zeitgeist of a post-9/11 world more directly than any other program on television. Other shows such as ‘The Wire’, ‘Battlestar: Galactica’ and even ‘Lost’ explored life in a post-9/11 in more metaphorical terms, but the political landscape played out much more directly on ’24.’

’24’ wasn’t an intentional response to 9/11, but it did debut in the aftermath of it. As you might recall, its actual premiere was delayed because the first episode featured a massive plane explosion. That plane didn’t crash into a building, but there was enough worry about people drawing comparisons between one and the other than Fox delayed the show a few months in order to lessen the parallel.

But a two-month wait didn’t outlast the public’s psychic shift, nor did it appease a latent (and not-so-latent) need for some type of revenge. In stepped Jack Bauer, a man who stood in as the representative of the country’s need for action, for justice, for bucking bureaucracy in order to accomplish what needed to be done . For those that felt helpless, Jack was their onscreen avatar, hammering away one day at a time.

After the first season’s success, the show spent the next few years replicating its essential formula while putting new faces on familiar threats. But by the end of the fourth season, ’24’ seemed to realize that things had to change, much in the way that the traditional view of the War on Terror had to change. So after four years of Jack-as-one-man-assault-squad, the effects of those years of violence started to weigh not only on those around him, but Jack himself. His self-imposed exile in the aftermath of infiltrating the Chinese consulate led to the shocking deaths of several key members of the ’24’ universe in the opening moments of season 5, setting up the show’s greatest overall arc — Bauer vs. Logan. The show that all but celebrated the American response to 9/11 just four years later made The President of the United States the freakin’ Big Bad.

Over its final three seasons, ’24’ showed the limits of Jack’s “torture first, ask questions later” approach, both on his ability to successfully overcome the threat at hand and his ability to maintain sanity in the process. ’24’ ultimately made Jack Bauer a martyr, a man that defended his homeland and ironically ended up without a home.

By doing so, they called into question the price that he paid for saving his country those eight times (and countless others off-screen as well). But they also called into question a country that needed a man like Jack Bauer to exist in the first place, a man that represented what we thought was our best but in many ways also represented our worst.

’24’ may not have been the best show of the decade. But it very well may have been the most important. The symbiotic relationship between the show, its viewing audience and the ever-shifting realignment in a post-9/11 world will be studied for generations, making ’24’ one of the most vital shows of the past decade.

And on the ninth day, Jack rested

Here’s a really fantastic writeup from Masked Scheduler, someone who was involved with 24 from the start. Yesterday FOX announced that this May 24 will be ending its 8 year run. As someone who was there from the beginning I thought I would share some moments from my small role in all this. 24 was… View Article

Humor site BBSpot has a funny article up about 24. It’s of course fake, but a fun read. Hollywood, CA – Fox was uncharacteristically candid this week about the next hour in one of CTU agent Jack Bauer’s (Kiefer Sutherland) many harrowing days. In an interview with Variety, executive producer Evan Katz revealed the next… View Article

December 21, 2010 at 11:51 pm
Such an accurate article makes me positive that 24 will indeed not be forgotten for a long time! It definitely does not deserve to be.. this line from the article touches me the most…