And on the ninth day, Jack rested 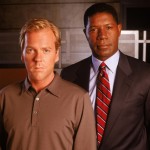 Here’s a really fantastic writeup from Masked Scheduler, someone who was involved with 24 from the start.

Yesterday FOX announced that this May 24 will be ending its 8 year run. As someone who was there from the beginning I thought I would share some moments from my small role in all this.

24 was the last drama ordered to pilot in our 2001 drama development. After I read the pilot script I emailed David Nevins, our top developer at the time, to tell him how excited I was about making this and of course he along with most of us on the 4th floor at FOX concurred…but you know….the food chain…it’s too serialized, it’s about terrorism, will women watch it, what if it bombs and we pull it before the conclusion…all valid questions but it was just too good not to make, so we did.

It was an awesome, high testing pilot with a breakout character brought to life by Kiefer, and we introduced an African American Presidential candidate to America. It was well received in our screenings. We debated the obstacles but it had to get on the schedule and we announced 24 for Tuesday nights at 9 in the Fall of 2001.

FOX did not have a very good reputation for sticking with shows back then so Sandy Grushow and Gail Berman were bombarded with questions at the Television Critics tour about our commitment to running all 24 episodes. We knew that we were taking an enormous risk on several levels and we would be skewered if we pulled it. Didn’t matter, we were going to roll the dice on this one.

One day after we announced 24, Warren Littlefield, my good friend and former boss, called to tell me that he had suggested to Joel Surnow (you all know who he is) that Joel call me and start a conversation as we were preparing to launch 24. Joel and I talked often that summer and the dialogue continued throughout Joel’s connection to the show…including one fateful call after Season 3 which I will get to later. Joel was very proud of the pilot and its unique way of story telling. I tried to tell him the obstacles to success for a show like 24 but he was convinced we had a hit on our hands……

….then shit happened on September 11.

We discussed whether we delay the premiere of the show. We looked at the pilot again and realized that there was one very dramatic scene (a passenger plane explodes in mid-air) that had to be removed. We needed to reevaluate the marketing campaign. We made the corrections and, since the show wasn’t premiering until November, we stayed the course. The events of September 11th gave 24 a whole new meaning and relevance.

Check out the rest at Masked Scheduler blog. It’s a great read and even has a nice Season 8 tease at the end.

A Final Farewell to 24 from TVSquad

24 Spoilers » Behind the Scenes » And on the ninth day, Jack rested