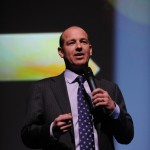 Variety has a nice writeup on Howard Gordon’s new show Homeland. I’ve seen the pilot and think the show is fantastic – worth checking out when it premieres on October 2nd after Dexter. Here’s their full interview with Howard Gordon and Alex Gansa, two ex-24 writers:

The “24” showrunner and exec producer wasted little time between ending Jack Bauer’s eight-year run as a rogue counterterrorist agent and launching Showtime’s new terrorism-themed series “Homeland” with his longtime friend and cohort Alex Gansa — a mere 15 months, to be exact.

Gordon was knee-deep in the quest to keep fictional America safe from nuclear, biological, chemical and cyber threats when his agent, WME’s Rick Rosen, called and announced, “I have your next show.” Rosen, who reps the Tel Aviv company that owns the underlying rights to the Israeli version of “Homeland,” thought the controversial series was ripe for translation.

One day after wrapping the “24” finale, Gordon and fellow “24” exec producer Gansa met at an L.A. coffee shop and began writing the pilot on spec. The series, which bows Oct. 2 in Showtime’s coveted post-“Dexter” slot, covers the same ground as on “24” but this time the war-on-terror depictions are more gritty and based less on imagination.

“Both ’24’ and ‘Homeland’ are about terrorism and a counterterrorist, in particular, but the world today is a very different world than the one Jack Bauer occupied when we first came on the scene,” explains Gordon from his office on the Fox lot, where he occupies the so-called “haunted house” suite formerly used by Shawn Ryan and David E. Kelley. “As compelling as the real-time premise of ’24’ was, it was also outlandish. ’24’ was a very pulpy kind of experience. ‘Homeland’ exists in a place that feels more real and more threatening.”

In the aftermath of the Sept. 11, 2001, terrorist attacks, film and TV auds have largely avoided fare that has hewed too closely to the evening news. Despite big-name talent and positive reviews, pics such as “In the Valley of Elah” and “Rendition” and skeins like “Over There” met a tepid response.

But Gansa insists that as attitudes about the terrorist threat are beginning to change, so too must the content that depicts it.

“In the wake of 9/11, there was this idea in America that we must respond to the threat of terrorism in a muscular, powerful kind of way, and that was Jack Bauer and ’24,’ ” says Gansa. “Ten years later, Osama Bin Laden has been found and killed, and the country is taking stock. Did we react overact? Our thinking as a society has evolved.”

It was no surprise that Fox, where Gordon has his deal, bought the pilot spec, hoping to marry the series with a broadcast network given that the long-term economics are better for such arrangements. But Gordon and Gansa always hoped for a cable network home. The pilot drew interest from both broadcast and cable, but newly esconced Showtime prexy David Nevins made the biggest play.

“It really needed to be on a network that would allow certain content that we had in mind,” says Gordon, who is doing double duty as showrunner and exec producer of NBC’s midseason drama “Awake.” “It’s not so much about the nudity and swearing,” which is plentiful, “it’s that you don’t have to write to these artificial act breaks, which tend to be a disruptive thing. It creates an artificial necessity to bring the story to certain pitched places that weren’t really conducive to this particular story. (The show) is slow-boiling psychological drama. We hope the audience is in this sort of hypnotic state, and the idea of having to leave that for a commercial break didn’t really work for this concept.”

Gordon says it has taken a decade for Stateside viewers to be ready to delve into a series like “Homeland,” which broaches the possibility of a rescued American POW having flipped to the enemy’s side.

” ‘Homeland’ could not have happened in the direct wake of 9/11,” says Gordon. “This show asks the question: Where are we now and what should we be afraid of? (Ten years ago), we all knew what we needed to be afraid of. A lot of us aren’t so sure now.”

20th Century Fox TV, where Gordon is under an overall deal, has acquired rights to the Israeli format “Prisoners of War,” which Gordon will co-write with “24” executive producer Alex Gansa and Gideon Raff; the latter created the original series for Keshet Broadcasting, whose recent launch in Israel has drawn a lot of attention. The… View Article