And by fallen we mean compromised.

As one of Col. Dubaku’s midlevel FBI moles, Sean Hillinger probably wasn’t destined to go the daylong distance on Fox series “24.” But actor Rhys Coiro, best known for playing the cocky “art-film” director Billy Walsh on “Entourage,” says that at least in going bad Sean got to be really bad, killing his co-worker and mistress Erika (Ever Carradine) during a final lip lock.

When did you find out Sean was compromised?
It was after the writers strike. We stopped filming right before Sean turned. So then there was a big several-month break where I had no idea what his fate was or even what the show’s fate was. I mean, naturally, I had my suspicions, as does every actor on the show. But there had been some intimations. Janeane Garofalo and I, well, let’s just say there was talk of a conspiracy with us, but then it, uh, turned out to be only me!

Did you feel Sean‘s personal ticking clock kick in then? “24” has never had a problem offing characters. (As of tonight’s episode, seven characters integral to the story have been killed.)
Well, we all knew that some twists were going to get even more twisted. It’s funny, I remember first starting out and Sean was something of a blank slate. But watching the show, he does seem like a suspicious fellow from hour one. I think he started out as sort of a red-herring character, and then he turned out to be, you know, the actual herring. I was actually driving in my car the other day through Hollywood and some guy pulled up next to me and was like, “Hey, you’re the bad guy on ‘24’! I thought it was gonna be you at first, but it was too obvious. I didn’t think it could be you.”

Was it intense filming that final scene between Sean and Erika?
Honestly, it was fun to be moving around. Up until now, my character’s been very static and sitting at a computer the whole time. I finally got to get my hands dirty. Fire! Gunplay!

What was working with Garofalo like?
I loved working with her. I love watching the character she created. It’s quite subtle and funny. She was just a cut-up when we were doing it so it’s sort of cool to see what came out of it. I never got to work with Kiefer though. That kind of bummed me out.

Are we going to see more of Sean this season?
Well, never say never, but you’re not going to see much more of him for the rest of this day. 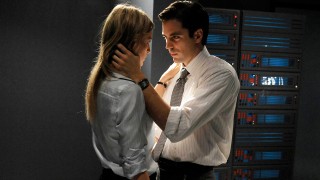