The newly re-formed Counter Terrorist Unit: New York branch is hidden in a Chatsworth, Calif., soundstage. As we prepared to infiltrate the set (see images below), techie extraordinaire Chloe literally provided decoy cover. Actress Mary Lynn Rasjkub got a makeup touchup outside, so we slipped into the studio while crew were focused on the pretty actress.

The hand scanner in the lobby accepted our prints for entry. Our plan to hack into the system to authorize our DNA for access worked, or maybe the hand scanner was just a prop. Either way, we were in. Through the bullpen of monitors capturing video feeds from high-population areas around town, past the medical bay where a monitor showed a flat line (someone dies this season!), we cornered new cast member Katee Sackhoff in the underground car park.

Sackhoff joins the cast of Fox’s sci-fi-ish spy series 24 this year and spoke with a group of reporters on the set. Her CTU training proved strong against interrogation tactics, but as 24 proves, repeated badgering and torture works. Here are seven pieces of intel she gave up. 24 returns this January on Fox. 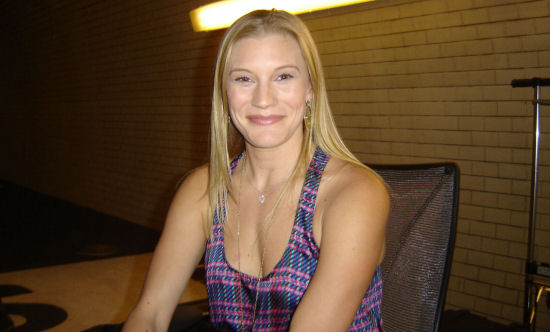 Katee Sackhoff on the set of 24

Katee plays Chloe’s boss. Chloe has never let authority stop her from getting the job done, but she’s never dealt with anyone like Dana before. “Dana is permanently happy,” Sackhoff said. “I think that also pisses Chloe off, because Dana’s like, ‘Oh, no, it’s totally fine that you don’t get it. Let me help you. It’s great. I’ll do that. It’s fine. You don’t need to figure it out, because I’m good enough to do both our jobs.’ So that really pisses Chloe off.”

Dana kicks ass. But intellectually. Starbuck fans might be disappointed they don’t get to see Sackhoff beat up terrorists. The show’s writers have a different idea for utilizing Sackhoff’s talents. “I wanted to just blow s–t up, and they were like, ‘I don’t know if we can do that,'” she said. “I came in and sat down with the producers and writers, and we had a discussion as far as what they wanted from me and what I wanted to do, and hopefully we’ll all [meet] in the middle, so we’ll see.”

You’ll see Sackhoff in a whole new light. Dana may be locked inside the CTU offices all day, but the premise is that she’s had an earthbound life. That allows Sackhoff to finally get some sun. “The first thing I thought was, I’m going to constantly have a tan, which is fantastic for me, because I spent the last five years on a show that you were in space, so you weren’t supposed to have a tan,” she said. “So this is, like, the orange [stage light] bounces off your skin, and everyone just has a nice little glow. You’ve either just been to Mexico, or you’re pregnant, so it’s perfect. It’s really nice, and just new. Orange looks good on me, so it’s exciting. I went from a show where color was bad to you’re now in an orange set, which is awesome.”

Something happens at CTU. Gee, thanks for the big tip. Sackhoff’s allowed to reveal that something’s going on at CTU. “I was like, ‘Seriously? I don’t know if anyone thinks that’s actually a big secret,'” Sackhoff joked about her gag order. “Could you imagine? So this is a 24 episode, and the whole season is just about nothing. No controversy, nobody dies, nobody gets beat up, Jack Bauer doesn’t do anything. He might not even show up, and for 24 hours that would just be what it is. Could you imagine?” That might actually be funny for like the first six hours. “It would, and then people would go, like, ‘Are you serious?’ Just office lives. I’m handing my files to Chloe. They show us at lunch.”

Continuity is easy. A lot may happen in a day on 24, and by episode 20 it can be hard to remember what you were playing in episode 2. At least her wardrobe doesn’t have to change. “It almost makes it easier, because it all takes place in the same day,” she said. “It’s one of those things where the continuity as far as your wardrobe doesn’t change, so it’s like, ‘Something’s [off]… my watch isn’t here.” Because you’re so used to wearing it that it becomes kind of like the gunbelt from Battlestar. It would seem very odd to not have it on. You have to remind yourself what room you were in last, not what happened last episode, because it all is taking you to the exact same place at the end of the day, kind of. So I found that easier.”

She’s still got a potty mouth. The word “frak” might not exist in the world of 24, and the Fox network has stricter language guidelines for broadcast than did Syfy, but behind the scenes, Sackhoff still talks dirty. She endeared herself to the 24 crew right away by sharing a dirty story about Battlestar. While Edward James Olmos was shooting The Plan, he reveled in the chance to include nudity on the DVD release. “There’s a scene in the Head where everyone’s just naked, and Eddie on the day is going, ‘Zoom in on the c–k. Zoom in on the c–k,'” Sackhoff recalled. “The camera guy’s like, ‘I can’t zoom in the c–k. He keeps covering up the c–k.’ They’re like, ‘Zoom in the c–k. Get him to do something else with his hands. Make him shave.’ So then he’s shaving, and he’s like, ‘Now, zoom in on the c–k.’ That’s on the daily. That is so Eddie. It’s one of the funniest things I’ve ever heard. ‘Zoom in on the c–k’ in Eddie’s voice. I think I told that story my first day here, and the crew was like, ‘We like you.'”