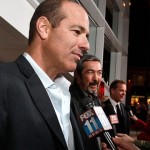 CNN has interviewed Howard Gordon about his novel Gideon’s War (and the upcoming sequel Allegiance) and even linked to my review/website in the article. Sweet, thanks CNN! :)

“Gideon’s War” is not by any means Gordon’s first effort to connect with an audience. As a former executive producer for The “X-Files,” and a consulting producer for “Buffy the Vampire Slayer,” he clearly has shown a knack for keeping things exciting. But will people line up to shell out money for his latest project?

“It’s hard to break out like this guy,” says Gail Ross, a nonfiction literary agent based in Washington who admits to being a closet fiction reader. “But he’s got enough notoriety, and once you have the blurb from people you trust and the brand recognition, the readers will talk to each other.”
Gordon is getting a little help from his friends for sure. Kiefer Sutherland, the star of “24,” has offered a blurb for the back cover of Gordon’s book.

While Gordon says he’s loved every minute of his budding career as a novelist, he hasn’t given up his day job. He’s hard at work on a pilot for Showtime called “Homeland.” So the question is, will he continue his latest adventure?

“I’m working on it now,” says Gordon. “It’s called ‘Allegiance,’ and it’s the second in the Gideon series, exploring some homegrown terrorism. I love these kinds of stories. They also are stories that are exciting as they are. They also contain a lot of ideas about politics and foreign policy and about this country.”

Check out the entire article over at CNN.