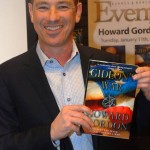 Howard Gordon is interviewed about his three television projects, his novel Gideon’s War (and the upcoming sequel) and the 24 movie which he says is “on hold” (despite Kiefer saying otherwise). He also claims that the 24 series had “run its course” and was “time to end”.

The first January in a decade with no ’24’ just passed. Are you missing the show as much as fans are, or is it nice to have a break?
I miss it, but I’m really glad it’s over. Because I’m so sure that it had run its course and it was time to end. So there’s really no regrets. But that doesn’t mean I won’t miss it. I actually had lunch with Kiefer not that long ago, and he and I mixed it up quite a bit over the years, and we both looked at each other and said, “I miss you, man.” It was really nice.

It seems like there’s a different rumor about the ’24’ movie every day, including one recently that Ron Howard would be directing the movie. What’s the latest news on the movie?
The ’24’ movie is on hold for now, although conversations are ongoing. Beyond that, there is no news — at least as far as I know.

What’s the biggest challenge in taking ’24’ to the big screen?
The challenge is just not making it a movie for the sake of making a movie version of ’24,’ but really having a compelling story … simply making it good, frankly. I know that sounds non-specific. But nobody’s interested just to do it as an exercise. If it’s going to be out there, it has to be out there for a good reason.

Read the full interview over at TV Squad.

Bull****. The show lost all emotional integrity after HoGo and his lackeys decided to write Renee off…