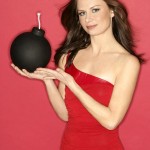 Another (non)-update on the 24 movie – Mary Lynn Rajskub (24‘s Chloe O’Brian) hasn’t seen or heard anything about the project.

I think we can safely assume Chloe would be on the short list of potential character returns, so the fact that she hasn’t been contacted yet probably says a lot about the current state of the project.

Shortly after Fox announced that 24‘s eighth season would be its last, reports surfaced that Jack Bauer would make the leap to the big screen in a European-set adventure. However, the film has hit many speed bumps: thanks to screenplay problems and star Kiefer Sutherland’s new midseason TV project at Fox, Touch. “I’m rewriting the script myself,” she joked.

When asked if she knew whether Chloe would be in the movie, Rajskub again had few answers. “I’d like to think she is. I hope so,” she said. “It’s either going to be me or Rachel Weisz playing Chloe.”

Fortunately, Rajskub has a new day job to fall back on until Kiefer & Co. come calling. On the new CBS sitcom How to Be a Gentleman, she plays the sister of David Hornsby’s character, a manners-obsessed columnist who (slowly) starts to embrace his macho side. Rajskub said she felt it was the right time to transition to comedy after years of helping Jack Bauer save the day. “I love Chloe and 24 and it was an amazing part of my life, but I was ready to lighten it up and do a little comedy,” she said. “People have said that I was a little bit funny on 24, so with people laughing at me in a drama, why not be in a comedy and have people laughing on purpose?”

Despite the mounting evidence that a 24 movie won’t be hitting multiplexes anytime soon, she’s staying optimistic. “I hope I can have a couple days off from How to Be a Gentleman to be Chloe,” Rajskub said.

August 8, 2011 at 4:50 am
What? So suddenly there’s mounting evidence that the 24 movie isn’t happening? Just because Kiefer is doing a series doesn’t mean he won’t have time to do the movie in the time-frame between season-shooting.

And Mary-Lynn was not on 24 for nine seasons. It was six seasons, seven if you count the divide of Season 7 due to the writer’s strike.