Kiefer Sutherland Talks About the 24 Pilot

“I never thought it was going to get past the pilot stage to be honest with you. It was so out there as an idea. […] Also as an actor, I think you have to be very careful to not get ahead of yourself. If you start banking on the fact that it’s going to get picked up, you really set yourself up to be let down.

They make hundreds of pilots a year and maybe ten get picked up. You just don’t think it’s going to get past that stage. So I never really thought of it in a long term way. It really wasn’t until around the second season that I thought wow, I might be doing this for a while.”

“I’m going to have to say Nina Myers because I’ve never heard jokes about the other characters. I remember I saw on someones tee shirt once “If Jack Bauer had Stalin, Hitler, and Nina Myers in a room and only had two bullets, who would he shoot?” And the answer on the back said “Nina Myers twice”. And I thought that was awesome. So I’m going to have to go with Nina Myers, she was the first kind of really bad one.” 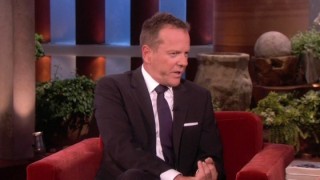 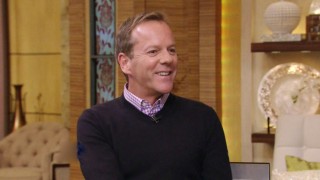 Kiefer Sutherland on Live! With Kelly and Michael

Kiefer Sutherland was interviewed on Live! With Kelly and Michael this morning. He discusses working in London, filming 24, The Super Bowl, working with his father Donald Sutherland on Forsaken, and his upcoming movie Pompeii.

Some other runner ups for me were Ramon Salazar, Vladimir Bierko, Mandy and Ira Gaines.

May 21, 2014 at 10:17 pm
Best villain on ’24’ was obviously Charles Logan, who else could compare? Runner-up would be (in my humble opinion) Christopher Henderson… it’s no coincidence the two best villains also both happen to be in the very best season!

Other than the above mentioned gruesome twosome, ’24’ has far too great a rogues gallery to list them, so I’ll just say one thing… MANDY!

I actually think Abu Fayed is my second favorite; he makes Season 6 a decent season to me…

May 23, 2014 at 1:11 am
Fayed was clearly the most sinister of all the villains IMO and the hatred between he and Jack was pretty gripping.

After that:
2) Marwan – I liked the cold, calculating and methodical way he controlled S4.
3) Logan – Although he wasn’t the villain perse, clearly his corrupt portrayal in S5 fit.
4) Saunders – As bad a rap as many fans give S3 because of him, I thought he was similar to Marwan as committed, intelligent and methodical. And when he had Palmer at his mercy, let’s not forget the condemnation he forced on Chappelle.
5) Gaines – The cat-and-mouse he and Jack had for first part of S1 was strong.

Worst villain was Philip Bauer/Chang of S6 followed by Drazen (Dennis Hopper could have done much better) effort than what he gave IMO).

May 23, 2014 at 10:36 pm
Mandy’s supposed hotness (no comment!) is not the reason she’s such a great character, we know nothing about her except her chosen profession; we don’t know her real name, any personal information on her background, she has the face (and voice) of a choirgirl yet she’s utterly ruthless, lethal, and amoral, she has an aura of mystique that permeates her scenes the rare times she pops up on the radar… and if ‘Live Another Day’ turns out to be ’24’s swansong, we’ll never see Mandy onscreen again… *sniff*.

Charles Logan? LOL. He was just a puppet in Graem’s hands, who got an order to commit a suicide and he was about to do it.

May 22, 2014 at 8:02 am
The best villain is Marwan and the Araz family of season 4. The acting was phenominal and those characters really gave us a sense of the Al-Quada attitude towards the U.S. Most seasons had the food chain of villains where any given villain only lasted for a handful of episodes. The ’24’ writers liked Marwan so much that they kept him as the main villain for the last 2/3 of the season. Marwan and the Araz family is one of the main reasons why season 4 was the best ‘edge of your seat’ thriller ever on TV.

May 22, 2014 at 1:22 pm
Apart from Charles Logan, I always thought his sidekick in Season 8, Jason Pillar, was particularly unpleasant. He was slimy, underhand, cowardly, just plain nasty – and came to a fitting end!

Credit goes also to Tony Todd as General Juma in Season 7. He was particularly brutal, psychopathic and cruel. Again he got his in the end.

May 22, 2014 at 4:52 pm
Absolutely !! Best Seasons with Nina ! Best scène ever : when Jack has to chop the hand from Chase off with an axe ! The coolest scène ever when Jack aint dead and Tony knows and sadest scene ever : when Edward dies behind the glas when The virus attacks ! In short : 24 rocks !!!!

May 23, 2014 at 3:04 am
Like Kiefer, Nina is my favorite villain: she worked with him and was the only villain who had the most intimate relationship with Jack because she slept with him !!
We never really knew his reasons: money? which makes her even more mysterious and compelling.
Besides, I always thought that even if she manipulated Jack in season 1, she was in love with him.

May 23, 2014 at 6:47 am
I truly admire actors who say their favourite villain/season isn’t conveniently what just happens to be the latest.

but yeah Nina for sure

May 29, 2014 at 1:55 pm
I thought Jason Pillar was a PHENOMENAL character, and his actor was fantastic. I would have loved him to be around more.

Mandy, though I don’t find her attractive, is incredibly interesting because she has no background other than being a gun for hire.

Logan, Henderson, and Bierko were all fantastic in Day 5.

Marwan and the Araz family, especially Dina, were exceptional to watch as well.

I never really thought Fayed was bad, but he just wasn’t very interesting to watch a lot of the time. Cheng and the Bauer family were annoying, except for Graem in Day 5, before they ruined that character.

Sherry Palmer was fantastic, and I was mad they had Julia of all people kill her. Julia was so annoying that I was happy to see her gone, but not Sherry. Sherry was awesome, and could’ve sent Olivia Taylor (Sherry wannabe) into the corner crying at any given moment.

Jonas Hodges was great, and I actually preferred Dubaku to Juma. Alan Wilson is okay, but it would’ve been nice to see more of him, as with Max and Trepkos from Day 2. It seems that any time the conspiracy comes to a head, the top guys always get taken care of off screen, which is annoying.

Gaines and Andre/Alexis were great, Victor was okay.

Kingsley was pretty entertaining, Marie and Syed Ali were okay. Amador and Saunders were great in my opinion, but Alvers was a wuss, and the Salazars were cool to watch, Ramon was fantastic.

I thought the only interesting villain in Day 8 was Bazhaev (spelling?). Farhad and the IRK radicalists were super bland and then of course we have the brilliant Charles Logan return, and Suvarov, who is good to watch, but again we don’t see too much of him throughout 24.

June 5, 2014 at 1:37 am
The worst villain was Ahhhkkmed Amar! I could not take Kal Penn seriously as a villain here after seeing him in Rise of Taj, Van Wilder and Harold and Kumar! He would make a good villain in a goofy film like Machete.