President Heller calls the CIA and Steve Navarro with some orders. “You are to give Jack Bauer whatever he needs. Plus silence.”

Jack has two men frisk Kate to make sure she’s not carrying any weapons or transmitting devices. He requested Kate because she “can handle pretty much anything.” Jack tells her about arms dealer Karl Rask, a man with connections to Margot Al-Harazi. Kate knows the man as the CIA has been hunting him for years. Jack surprises Kate by revealing he’s been working for Karl for the last two years. “Unfortunately for us, the second he sees me, he’s going to want to kill me.”

Mark Talks to Audrey About Jack

Mark admits to Audrey that he’s concerned what Jack’s presence could do to her.

Jack’s Position in the Rask Organization

Kate has a hard time understanding how Jack could work for someone like Rask.

Loose Ends to Tie Up

Margot tells Simone not to take any chances. 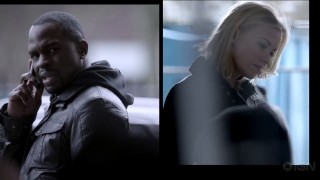 Here are four sneak peeks from 24: Live Another Day Episode 3 airing on Monday. 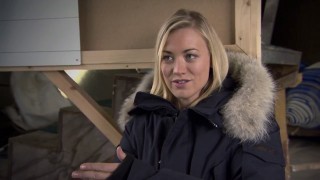 Eight sneak peek clips from the fourth episode of 24: Live Another Day airing May 19th on FOX. 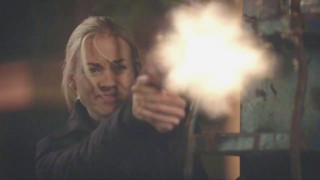 May 30, 2014 at 12:50 pm
Dang it, 24 Spoilers! I open up Facebook and the FIRST THING I SEE is a bleeding Navarro! I wanted to wait until I watched the episode to see who lived through the explosion!

May 30, 2014 at 1:07 pm
Not for nothing but you can see Navarro walking around at the end of the last episode after the explosion.

May 30, 2014 at 1:07 pm
Sorry about that Nathan, it was the thumbnail of Fox’s Youtube video (and one they will probably post to Facebook soon anyway). Just replaced it with an image of Kate.

May 30, 2014 at 12:56 pm
Oh, that conveniently timed split screen and that look from Jordan… He just gained 24 points on the potential mole-scale.

And “is that relevant?” Poor Kate, she really don’t get a break. If her husband magically show up, she probably gonna hang him upside down in the CIA headquarters and go medieval on his ass.

May 30, 2014 at 3:29 pm
Which would be ironic in the extreme. After everything, Jack goes down a similar path and look who is around the corner when he tries to work his way out of it but Tony…

May 30, 2014 at 2:54 pm
Did Kate lie a little to Jack here? We know she was implicated for a time but that the CIA ultimately cleared her of being involved, since she mentioned that to Jordan in the first episode but when Jack asks here here, she says she wasn’t implicated. I kind of like that she doesn’t just tell him everything and trust him.

May 30, 2014 at 4:34 pm
Bringing back Tony would be cool, but my number 1 wish is that they woud bring back Edgar Styles’ mother. She was my all time favorite character. And we never actually saw her die. Finally, if it’s between bringing her or Mandy back, it just has to be mama Styles!

May 30, 2014 at 4:44 pm
24 is always known for blowing stuff up and when I saw last week’s episode, it really blew me away when Navarro and his team were ambushed after a missile drone blow the house down which could’ve been Margot’s safe house. This limited series of 24 keeps getting better and the action and suspense is why I’m a huge fan of the show since 2001. Can’t wait for Monday’s episode where it gets really intense and don’t forget about the most intense part about 24: TORTURE.

May 30, 2014 at 5:48 pm
24LAD Prediction: If Jack is led to Margot, Simone might recognize him from the train, hence blowing his cover…unless Jack has a plan (which he usually does).

May 30, 2014 at 6:04 pm
Will we ever find out how Jack new that President Heller was in jeopardy. How did he know London was a target?

May 31, 2014 at 12:36 pm
if they make jack some kind of terrorist in the end, it will make it hard to watch previous seasons. (sorry for the typo mistake above)