FOX International Channels held a special Google+ Hangout with 24 star Mary Lynn Rajskub and several fans from around the world were able to ask questions – Andrea from Italy, Blajez from Poland, Lara from Spain, and Trevor from the US.

Here’s a few of the interesting answers that we’ve transcribed from the 40 minute interview:

“The old crew from 24 and Kiefer and Jon, we see each other at parties and stuff like that every once in a while, but I haven’t really been seeing them regularly. So it was pretty surreal to be in London and to be with them again and to get back into 24… They’re kind of like family to me at this point, so it was a really great experience.”

“I met with hair and makeup and wardrobe, it was really open to our interpretation, so we tried a bunch of different looks. I was platinum blonde for a second, I had dreadlocks for a minute… We just kept veering towards this darker look and experimenting and it just kind of seemed to fit.

At first I was worried it was a ripoff of The Girl with the Dragon Tattoo, which it kind of is, but what I realized is, there’s just sort of a general dark goth. It’s not like a new look, but I think she kind of entered into that world and all those things became an expression of her pain and also sort of masking it, putting on a different front to the world. I never thought I’d see her in that position, so it was exciting to do that.”

“I got to warm up to the show and my character by doing the 24: Live Another Day Super Bowl Promo. So that actually made it really fun because it felt like the show (but it wasn’t), so it was a good way to get reacquainted with Kiefer Sutherland.

They can’t really lock down the streets in London, so we had all these people in their big office building next to where we were shooting and people were filming it. It was very filmic and dramatic and I think a great teaser for the show. But one thing for me personally, I guess I was looking forward to the reveal of my character and my characters look, and it was a real lesson in the way things are now in social media and the way things get released. There’s no downtime. As soon as there was one person with one camera, I said “Oh, everyone saw my hair and my leather jacket. I guess that’s not a surprise anymore!”

I wasn’t expecting that my look would be completely out there before the Super Bowl ad even ran.”

“The very first episode of 24: Live Another Day, how I’m in that torture room and Jack comes and breaks me out? When I first read that I just got really excited and thought “YES, 24 is back!” and that this is going to be crazy. It was so much fun to film that and such a different situation for me to be in. We didn’t do the torture thing until several days into filming. And when we were coming up with the makeup, we were all geared towards that moment where you first see Chloe, and that wasn’t the first thing that we shot.”

Getting the Chloe O’Brian role

“I thought they were going to fire me. My first time I was on 24, I think I had signed on for 4 episodes as a guest star. And every time it was four more episodes until 3-4 years in and then I finally relaxed a little bit. I thought OK, they’re going to keep me around for a while.”

“The creator of 24 Joel Surnow had seen me in a Paul Thomas Anderson movie called Punch-Drunk Love where I played an overbearing sister to Adam Sandler; really bitchy and overbearing. And he said “I like that quality and I would like to have that on my show.”

My agent said “24 wants to see you” and I said “No, I can’t handle that.” I just had a bad audition for another drama [CSI] so I didn’t want to go in on it, and my agent said “No, they really want to see you”. And I didn’t know the show, so they sent me a DVD and I watched two or three episodes and the meeting was the next day.

I went in and Joel Surnow called me out on it because he’s like “So you like the show?” and I said “Yeah, it’s really good” and he said “You don’t watch our show, do you?” He knew that if people are really into 24 then they’re crazy for it, so I had just did the crash course. And then he said that he liked me in that movie, and he’d write a part for me. Stuff like that as an actor keeps you going, cause it’s a lot of “No’s” [when auditioning].

“This time around on 24: LAD, it was kind of like riding a bike, just kind of getting back on there. I feel like I kind of know that jargon, even though I don’t really. Usually I’m a pretty quick study when we’re memorizing a scene and we’re just talking naturally, but when it’s this kind of [tech jargon] stuff [I have difficulty]… and I learned that my first day of shooting 24.

My very first day of shooting 24 I said the tech jargon and got through a take. And then they were re-lighting and setting everything so it was like twenty five, thirty minutes later and I came back and went to do the scene again and it was just completely gone from my mind. And I was like “Oh my god, I’m going to get fired right now!”

After I finally got through it, I just went in the corner and started repeating it to myself over and over again. They gave me a few minutes, and that’s a terrible feeling when a whole production is waiting on you. Every minute that passes is costing them money. And so I finally got through it, and then both Kiefer and Jon Cassar came up to me afterwards and were like “It’s okay, it happens to everyone.” And that was my introduction to 24.”

Filming on location in London

“It’s a little distracting. There’s one scene that was filmed at Charing Cross Station – we shot there two different times, and it’s a very busy part of London. We pulled the car into a place that no one would normally get to park. And it was the scene where Chloe was crying in the car to Jack and I’m trying to monitor Simone coming out of the London Underground, and then that family walks past and I gets distracted and I’m crying and everything…

What’s really happening in real life is there’s a circle of fans and there’s a woman with her camera waving at me. And I was like can you please just move two feet that way, cause I’m really in turmoil right now. But overall, very fantastic because people are excited to come out and watch the filming, and it’s a really great experience to be in London and see the fans.” 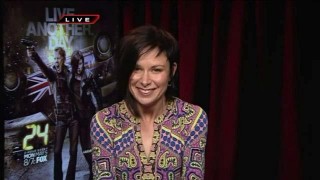 Mary Lynn Rajskub was interviewed by FOX 2 News St. Louis and spoke about 24: Live Another Day and the 24 movie. Watch the video (or read the transcript below) to hear what she had to say. 24: Live Another Day’s Story Twelve episodes will be airing May 5th. It’s really exciting, I was pretty… View Article 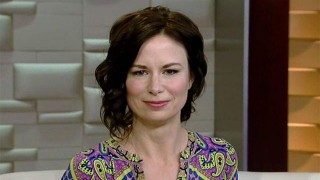 Here’s Mary Lynn Rajskub on FOX and Friends. She talks about Chloe’s new look, fudging the time, what she types during computer scenes, and more. Bonus photo: Stick around for the After the Show Show with '24' actress, @rajskub. http://t.co/6LdfkCQXli! pic.twitter.com/8cKyzxT78p — FOX & Friends (@foxandfriends) May 2, 2014 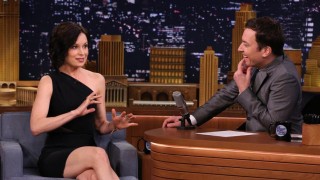 If you remember from this site I got to chat with her last month on HuffPost Live – can’t believe I got to again! Lots of fun.

I also got to chat with her one on one for a good ten minutes before we went live, and we just talked about random stuff. She had me dying laughing.

That Bon Jovi mention from hers is a joke from earlier lol it’s too bad I don’t have the full video anymore! :(

June 18, 2014 at 3:22 pm
BTW, chatting with Mary Lynn backstage, she says definitely don’t rule out a season 10. There has been discussion

June 18, 2014 at 5:51 pm
This podcast would have been so much better had it totally focused on 24 and Mary Lynn Rajskub’s 6 month stay in London. She is best known worldwide for her role as Chloe O’Brian on 24. If it wasn’t for her iconic and classic role on 24, I would still have not even heard of her.

The Tony catchphrase stuff was pretty awkward as Mary Lynn seemed completely confused and had absolutely no clue what you were talking about, lol. It was fun to watch you try and explain it to her with little success. She just needs to watch that YouTube video here: https://www.youtube.com/watch?v=XIZKr4YU2hE

And I was cracking up that you were able to perfectly recite an entire scene along with a great “Damnit, Chloe” yell that would make even Kiefer proud. Loved that you were rocking the “Damnit Chloe” shirt too!

You’re obviously a huge fan of Mary Lynn so it’s pretty cool that you’ve been able to get into two of these live chats and speak with her.

June 18, 2014 at 10:03 pm
12 minute 30 second mark is when Trevor asked MLR what she’d want Chloe’s catchphrase to be. He mentioned Tony’s “Alright” catchphrase which she didn’t seem to know anything about and it was awkward for a bit there.

I found her reaction to “Alright” hilarious. And yes the Dammit Chloe shirt was a hit before we went live! I’m really bummed out I’ll never be able to watch the nice little 10 minute one on chat I had with her again! She was hilarious.

And yes I am definitely a huge Mary Lynn fan. Anyone else find the look she gives me at 30:56 really adorable? lol love it! Whoever saw the HuffPost live interview will know the story behind that.

Kiefer and Jack may be my favorite actor/character, but Mary Lynn is my favorite cast member. Does that make sense? lol

June 18, 2014 at 8:35 pm
I thought it was kind of unfortunate that they didn’t let the fans direct more of the conversation. Glad you got to talk to her more though, and I’m glad another season isn’t completely outside the realm of possibility.

June 19, 2014 at 12:12 am
I would love to direct more of these with her lol. To be honest the greenroom chat was more entertaining! And Mary Lynn was on fire too, making us all crack up. She was teasing me a lot lol, but it was hilarious