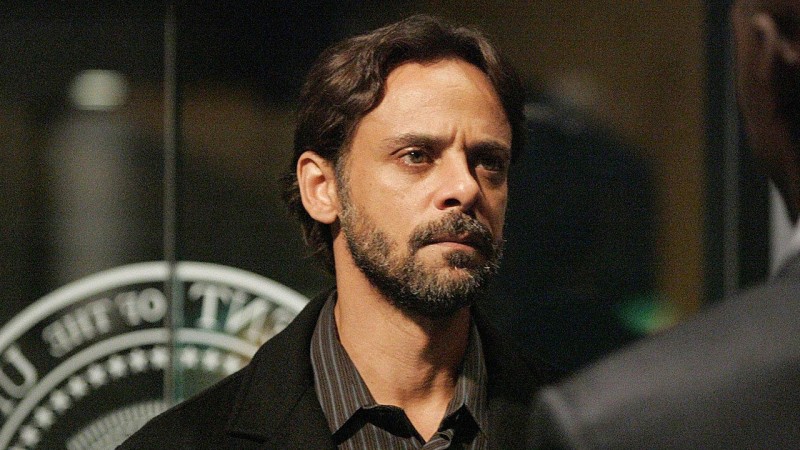 Oh, yeah, yeah, that was good fun. I really enjoyed that. I like Kiefer Sutherland, who has a weird memory thing. He has what I would classify as an eidetic memory: He can look at a page and he knows the lines. And it’s kind of annoying, because… [Hesitates.] I think this was season six, so by that time he was king of the heap, ruler of the roost on the 24 set, and he had a habit of rewriting the damned day’s dialogue in the morning for the first 20 minutes or half-hour of every day. And because he’d written it and therefore seen it, he knew it. And I had to just learn all these pages of dialogue from scratch, having lost all the dialogue I learned the night before because I’d suddenly been rewritten. And he was, like, “Come on, man! Keep up, keep up, keep up!” [Laughs.] I was, like, “Dude! I cannot keep up! I don’t have this weird-ass alien memory thing that you have going on!” But he was really cool. Really cool.

But I remembered that I’d been booked to do this art film that probably cost about four bucks. I was only booked to do a couple of episodes of that show, and it ended up being quite a few because it rolled and morphed, so at a certain point I said, “Look, guys: Thanks, but I’ve gotta go. I’m already booked. It’s a matter of honor. I told this woman I’d do her movie, and now I must do her movie. It only cost 50 bucks, but they’re the hardest ones to get going.”

And one of the producers on that called David Fury—and his name I’ll never forget, because his name was so appropriate—came up to me in the lunch queue and went, “Alexander, you fucked us! You fucked us!” I was, like, “What? What happened? What did I do?” “You’re leaving us!” And he was absolutely livid. He was so angry that I had decided to turn down 24. Because they wanted me then to go on to do more seasons. And it was a real compliment, and it probably would’ve made me wealthy and famous. But I promised to do this other movie, called Un Home Perdu, which was in French and meant me wandering around Jordan for weeks on end and was a thoroughly difficult experience. So they decided they’d blow me up. They just blew me up, unceremoniously. And that came into the script because they were so angry about the fact that I had apparently fucked them. So there you go.

It’s unclear if Siddig meant more “seasons” or just more episodes, but it’s obvious the writers wanted him for a lot longer.

Jack Bauer would probably have thought of an escape plan, but at the July 23 Fox All-Star party in Santa Monica, reporters literally cornered Kiefer Sutherland to get his thoughts on this past season of 24 and why Africa didn’t pan out for the coming “day.” “I felt that [Season 6] was no different than… View Article