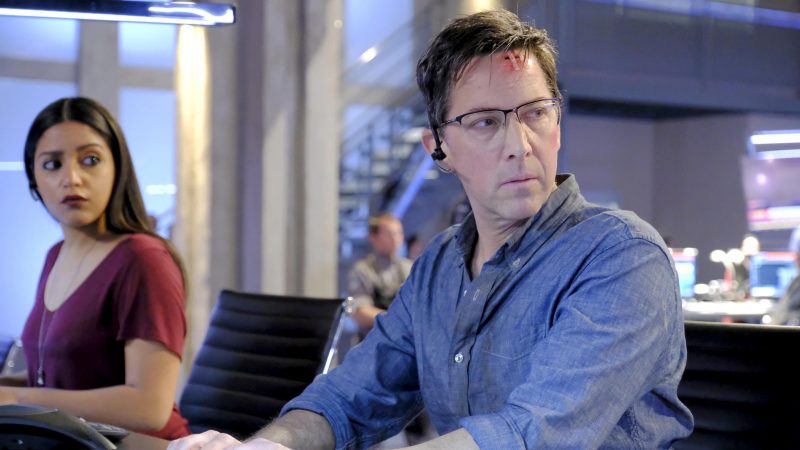 This is what the ratings look like for the complete season: 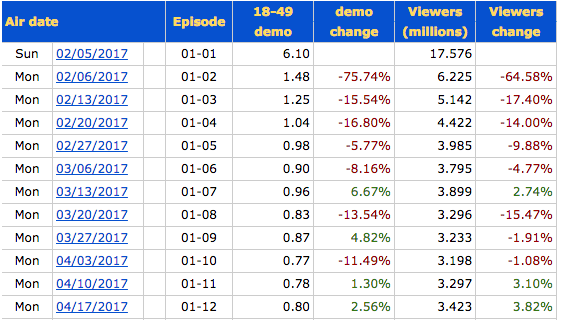 FOX boss Dana Walden said last month that she was “a little sad” about Legacy‘s disappointing ratings performance and that “we’re just going to have to see how our pilots come in, how it continues to perform and weigh all of the information we have in May.”

What might help 24: Legacy‘s renewal chances is that the network has only produced four new drama pilots this season.

Long-running drama Bones ended its run after twelve seasons on air last month, and all indications point to APB and Pitch being axed, so the network will have some slots to fill. Other FOX dramas on the bubble are Scream Queens, Rosewood, Sleepy Hollow, and The Exorcist.

Here’s what former FOX scheduling head Preston Beckman had to say about this yesterday:

Have not seen the final episode of “24: Legacy,” but if I were still at FOX I would not recommend returning the series that quickly. It got the big Super Bowl push and quickly settled under a 1 rating in live plus same-day, so there was little urgency in viewing it. 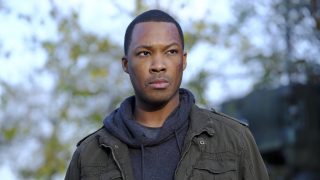 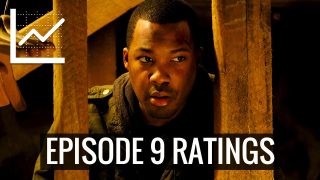 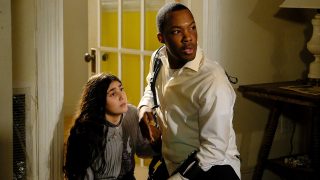 These ratings were low as I dont think people connected with the story and characters.

Back to the drawing board I say…

Ever since he departed the show (S7 Ep 8) most of the new characters they’ve introduced have been severely lacking.

April 20, 2017 at 12:11 am
While you’re here, reminder if we can do a poll on our favourite season? Or some kind of ranking thing? What else can we do? Fav president, agent, villain, etcetera

April 20, 2017 at 2:05 am
Yup, just have to think of the best approach. There’s been dozens of villains for example which would be unwieldy to do a poll on.

Same thing for ranking the seasons, kind of a difficult thing to do in poll form. But something like best President would be easier to do though.

April 20, 2017 at 2:09 am
You could do a 24 villain bracket. Separate polls for best villain of each season. Then the final round is a poll with the winner from each season.

I think that I’d need an “all of the above” choice for that one, though! They’re all equally amazing for different reasons.

April 20, 2017 at 9:52 am
It would be nice if Joel Surnow headed up one last Jack-centered limited season, but I’d settle for HoGo being sole showrunner again.

I think Brad was absolutely correct in his assessment a while back of the current Coto/Katz regime at 24… they’re good and talented writers, but as showrunners, they only seem to grasp the basic mechanics of the show, not the underlying human connection that makes it what it was… HoGo, for all his imperfections as a showrunner, totally understands and can capture that human connection onscreen in between all the action and mayhem… if he had been sole showrunner of Live Another Day, it probably would have resonated more than it did (although I enjoyed it overall).

If Legacy is cancelled, and we have to wait a couple of years before Kiefer is available and/or willing to return as Jack – not to mention a suitable narrative hook can be devised – and if Joel Surnow either isn’t approached or doesn’t want to return as showrunner one last time, I hope HoGo can devote his full and undivided attention to it… I would settle for that at the very least.

April 20, 2017 at 4:26 am
it was low ratings because THE Almeida was Limited and because it went up against WWE RAW

April 20, 2017 at 7:03 am
Roman Empire! Believe that! Tony channeled his inner Roman Reigns when he speared Carter through the door.

April 20, 2017 at 7:03 am
The Glenn Beck Radio Program discussed how the ratings were immediately following the Superbowl VS the finale found here: https://youtu.be/FPBvfi8y9iw?t=3927

Sounds like one of the hosts on the show liked the show OK, but the others didn’t watch the program. At one point (I think Glenn) said ‘You can’t have 24 without Jack Bauer.’

April 20, 2017 at 9:26 am
They should just let Prison Break run its course and then plagiarize your April Fool’s idea. Would bring in audiences from both shows, would be a fresh/new idea, would not involve Jack saving the world again. That’s what made Season 1 so great, a very focused, more personal threat, instead of some grand scale terrorist attack affecting millions of people.

April 20, 2017 at 11:22 am
Unless FOX can get Kiefer to do one final season, hopefully 24 episodes (but 12 would be better than none), there is no way 24 will ever return. Furthermore, unless FOX is willing to open a bank vault for Keifer, and I mean a very large vault, Kiefer won’t return. FOX also will have to come up with a great script, bring Tony and Chloe back, and announce that it is the final season. This is a lot to ask, and I honestly think that there is a 10% chance, at the most, that this will happen. Kiefer will be 52 in December, so FOX cannot wait for another year or two to try to make this happen. If it doesn’t, please say goodnight to 24, for Legacy was one of the worst programs that I have seen in many years.

April 20, 2017 at 5:47 pm
Kiefer dose many of his own stunts, as he prefers it that way. He has publicly said after LAD that he had it tough physically. He also has said that he was finished playing Jack Bauer. So it would take some big bucks and a great script to get him to reconsider.
\

April 20, 2017 at 8:49 pm
Kiefer smokes like a chimney. He is likely suffering from emphysema and CAN’T do the stunts or run. Lifting a table in an interrogation room probably makes him feel winded these days.

April 20, 2017 at 12:41 pm
People who are saying 24: Legacy is the worst season of 24, I disagree. Yes, it has some rubbish moments in, but it’s still 24, I have enjoyed it so far, Episode 10 aired over here in the UK last night and it was very tense and gripping, I thought Rebecca would have got killed off in that fire on the football ground, but someone last night after 24 spoiled it for me about Rebecca got killed off in the finale – (I blame my friend on Facebook) for that huge spoiler.

Also, I wasn’t expecting Jadalla bin-Khalid to still be alive when Eric shot him, but in the closing moment, Rebecca said he is still alive!

April 20, 2017 at 1:13 pm
I thought episode 10 was one of the better ones this season. I still had some hope the writers could turn it around at that point. It was the next two episodes where it went completely off the rails for me.

Jadalla is actually dead. Rebecca was referring to Jadalla’s father, Bin-Khalid Sr. (the man in the wheelchair). They all thought he was killed six months ago and this was her first time seeing him alive.

April 21, 2017 at 7:17 pm
Legacy isn’t my worst either. 10 years of disappointment lowered my expectations massively, so it didn’t infuriate me like LAD did for example.

April 20, 2017 at 12:47 pm
season on a whole was pathetic, and the ratings proved it. please don’t bring this back as 24 Legacy again. If its ever brought back, I agree it has to be a full 24 episodes. They could even do 2 episodes a week. 1 on Sunday night , and 1 on Monday night. or split up the season, 12 episodes in the fall, and 12 in the spring. Do NOT bring back any of the cast from legacy. If Keifer or Carlos don’t want to comeback, then there is no point.

Also, who I want to return is Bailey Chase as Thomas Locke (he is also good looking), it’s such a shame the writers didn’t explore his relationship with Andy!

April 20, 2017 at 3:44 pm
Thomas Locke is like my clone, and I’m very insulted that the 24 Legacy writers think that I’d be a good match for Andy. If I was a shirtlifter, I think I could do ALOT better than that!

Why don’t you have your own review site? I would read the shit out of that

May 5, 2017 at 12:03 am
I wanted 24 to end permanently after Live Another Day.
Watching Legacy made me want another season.
That’s quite impressive.

I really enjoyed Legacy and was surprised at how much I liked it and fell for the characters.

I’m actually rooting for its return with these characters.

And I want to see Donovan bang his hot secretary.
Too much?