Sarah Clarke interviewed by YOU Magazine

When Sarah Clarke got her big break as double agent Nina Myers in the hit TV series “24”, she was swept away by the dizzying pace and excitement. Little did she know her character would turn into the ultimate double-crossing bad girl…

People give me weird looks when I go out these days,’ says Sarah Clarke. ‘It’s kind of worrying.’ But not altogether surprising. Sarah Clarke is striking for a number of reasons: her gamine good looks, her confident, breezy manner. And then there’s the little matter of being television’s top traitor. If you missed the first series of “24”, last year’s big US TV hit that clocked up five million BBC2 viewers, the latter accolade may not mean much, but luckily you can plunge in with a thrilling new series.

Innovative and breakneck, the first 24 ‘real-time’ episodes made up a hellish day in the life of Jack Bauer (played by Kiefer Sutherland), a counter-terrorism agent with the CIA. This mission to foil an assassination attempt on black presidential candidate David Palmer (Dennis Haysbert) was hindered by multifarious gangs of terrorists, numerous kidnappings of his wife and daughter and the presence of a mole at the heart of his organisation. Finally, in episode 23, the mole was revealed as Nina Myers, played by Sarah, Jack’s seemingly steadfast right-hand woman (and former lover).

She was dragged off to prison, but not before shooting dead Jack’s hapless wife Teri for good measure. “24” addicts were shocked, but Sarah was aghast.

‘No one told me that it was going to be me!’ she says. ‘None of the cast knew until about five episodes from the end. We were only shooting a few weeks ahead, and everyone had looked as guilty as hell at different points.’ She soon got used to the idea, however. ‘In the end, I thought it was a pretty cool illustration of someone who is so deeply buried in their double-agent role, they’ve hoodwinked everyone.’

With its numerous explosions, endless twists and knife-edge tension, “24” cranks up the adrenalin to such a pitch that the myriad plot implausibilities can be overlooked. ‘The great thing about the show,’ says Sarah, ‘is that it’s completely ridiculous on one level, but completely serious on another.’

The series is 30-year-old Sarah’s big break. She hails from St Louis, Missouri, and, while her mother was an actor ‘in a small-scale kind of way’, Sarah’s interest in the profession sprang from a university exchange year spent in Italy. ‘A friend suggested I do some acting classes while I was there as I’d long had the desire to perform,’ she says. ‘I had to take on these roles in Italian and it kind of freed me. I discovered all these different sides to myself.’ She pulls herself up. ‘Oh God, it sounds like pretentious actor rubbish, doesn’t it? But that’s where the initial spark came from.’

On graduating from college, she got a job as an architectural photographer, and managed to secure free acting lessons in return for photographing an arts centre. That led her to New York’s Circle in the Square Theatre School and ‘various funky productions way off Broadway’. She’d only done ‘one tiny TV role’ when she flew out to Los Angeles in early 2000 to read for the part of Nina. ‘We did a pilot and I was asked back a month later. I got there, read the script, met the director, did a test with the network, got booked and was on set by that afternoon. It was a whirlwind. But I was happy to get swept up in it.’

The dizzying pace was maintained over the course of 24‘s first series – ‘Sometimes you’re like, “Where’s the scene where I just walk casually down the street instead of zinging around like a ping-pong ball?'” – and the new series, for which all the cast members, minus Teri, of course, have returned, is just as frenetic. President Palmer is now in the White House and Jack has a new set of horrors to endure, Nina foremost among them. While the plot details are closely guarded, it’s safe to say she won’t remain incarcerated for long.

‘I thought there was no way they could do a second run,’ says Sarah. ‘I mean, what more can they put Jack Bauer through? But they’ve come up with a really great concept. If anything, it’s even faster than the first one. One thing I have noticed,’ she says, ‘now I’m the bad guy, is that people aren’t treating me so nicely on set. I’ve had a few digs in the ribs about my new baddie persona!’

Not, though, from Xander Berkeley, who plays Nina’s boss George Mason. Sarah and Xander embarked on a clandestine relationship during the first series. ‘We met on the pilot,’ says Sarah, ‘and started dating pretty much straight away, but we kept it close to our chests. We just didn’t want it to get in the way.’

They eventually broke the news to the cast halfway through filming. They were gobsmacked,’ says Sarah. There were all these rumours about who I was dating, but I don’t think anyone was expecting that.’ The pair tied the knot at the end of the first series. ‘Xander’s character is really grumpy in the show, but he’s a riot in real life,’ she says. ‘He was the only person I knew in LA when I went out to work on the show. So there was a nice air of synchronicity to the whole thing.’

Sarah, whose performance in “24” catapulted her on to the A list, has been getting used to the growing attention. Recently, a man approached her at the Sundance Film Festival and announced that she was his obsession. ‘Hmmm,’ she mutters, ‘I wasn’t quite sure what to say to that.’

She was at Sundance to promote her film “Thirteen”, a movie exploring a teenage girl’s descent into a sex and drug hell. Co-written by and based on the experiences of a 13-year-old girl, it has caused a predictable stir. ‘It’s a supporting role,’ says Sarah, ‘but I loved doing it. It’ll be quite sobering for any parent to watch.’

She and Xander are also hoping to get some of their own projects off the ground. ‘He’s keen to direct,’ she says, ‘and I’m keen to star. So who knows?’

Right now, though, there’s “24” to wind up. Will there be a Scooby-Doo moment to match Nina’s unmasking this time round? Sarah clams up. ‘All I’ll say is, stay alert,’ she says cryptically. ‘No one is what they seem.’ 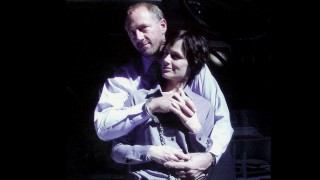