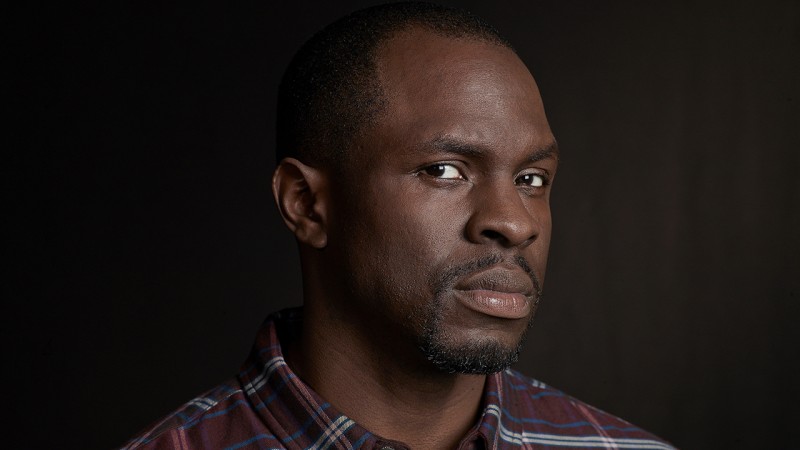 Gbenga Akinnagbe (born December 12, 1978) is an American actor, best known for his role as Chris Partlow on the HBO original series The Wire.

Gbenga Akinnagbe was born in Washington, D.C. to Nigerian parents and grew up in Silver Springs, Maryland. He is the second oldest of six children.

One of Gbenga’s first successful forays into television was the recurring role of Chris Partlow on the HBO series The Wire, and during the show’s fifth and final season he was promoted to a series regular. He was also seen in a series regular role on the Showtime series Barbershop. In the summer of 2006, Akinnagbe performed the role of Zim in the New York City Fringe Festival’s award-winning production of Modern Missionary.

In 2007, Akinnagbe appeared in the Fox Searchlight film The Savages, directed by Tamara Jenkins and starring Philip Seymour Hoffman, Laura Linney and Philip Bosco. He appeared in the Tony Scott-directed remake of The Taking of Pelham 1-2-3 with Denzel Washington and John Travolta, which was released by Sony in June 2009.

In 2010 in Seattle, Washington, Akinnagbe premiered his one man show called The Thin Place at The Intiman Theatre, where he portrayed 11 different characters. Following that he starred in the Warner Bros. comedy Lottery Ticket. Gbenga recently recurred on the CBS hit The Good Wife as Pastor Isaiah Easton, and on the Showtime series Nurse Jackie as Kelly Slater, a new nurse in the show’s 3rd season.

Gbenga’s independent film credits include a lead role in Home, directed by Jono Oliver; a pivotal supporting role in the Joe Hahn-directed Mall with Peter Stormare; as well as Claudia Meyers’ Fort Bliss with Michelle Monaghan and Ron Livingston.

In addition to acting, Gbenga produced Newlyweeds, which premiered at Sundance, and the dramatic character piece Knucklehead, which he also stars in.

Continuing to be versatile, Gbenga has also begun a writing career, having had three articles published in The New York Times, one detailing a trip to Nepal to climb the Himalayas, another speaking to his experience with the sport of wrestling and how it kept him out of trouble as a youth, and the other outlining the medical procedures he underwent to correct his severely flat feet. This newly found writing passion lead Gbenga to discovering his voice, which he now uses as a frequent guest on Huffington Post Live, where he speaks about social issues.

Gbenga Akinnagbe on the web

Behind the Scenes of 24: Live Another Day Episode 5

24: Live Another Day Episode 3 Behind the Scenes Video

Behind the Scenes of 24: Live Another Day – Tunnels Under the CIA

Gbenga Akinnagbe video interview: “it’s going to be a ride”